After 7 months of training the WHW weekend had arrived, 96 miles with 15000ft of elevation to negotiate to collect goblet number three. Race prep had been structured well and my race crew of Mark and Duncan from the last two attempts were alongside me again to assist me along the way. We had also been given a big boys toy car for the weekend for the lads to have fun with courtesy of Evans Halshaw. 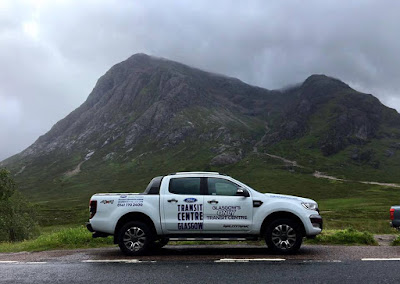 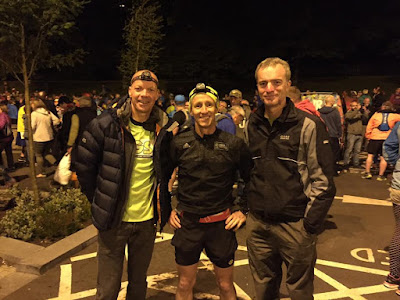 Having struggled a little in the last few months with a sore left foot and an on and off hip niggle I knew my ultimate goal of an 18 hour finish was going to be a big ask but I wrote the plan for that with other contingencies if I was off the pace. On Thursday I had a tight right hamstring but I just put it down to resting with only a few miles ran in the week leading up to the start but come 1am on Saturday morning standing on the start line I was still massaging and stretching it to get it loosened. I said to Mark it would probably ease of after a few miles but it turned out it was 41 miles at Beinglas till it eased off and then I suspect the damage for compensating had been done and now the plan had been ripped up and just finishing was the new target.

At Auchtertyre Farm I was 1.5kg under my starting weight and realised I hadn't been drinking enough so had a mullerrice and a bottle of water here and asked the lads to meet me again at Tyndrum for another snack and juice.

The blue skies at Tyndrum were to be the last I would observe for the rest of the race as the weather decided to take a turn for the worse. As I approached the last climb on Rannoch Moor a topless *male* relay runner came past me asking how far to Glencoe and I replied it was about 2 miles from where we were, 1 mile to the top of the climb and 1 mile downhill. I thought to myself he must have been feeling the heat and in all fairness it was actually great running weather but just as I got to the top of the climb a rather ominous breeze hit me and then I got drenched with hailstones and rain. This had an amazing effect on me as the cold took an instant hold and I felt my body start to slow right down. By the time I got to the checkpoint I was shivering and honestly didn't know where I was.

It is at this point a good crew are worth their weight in gold and Mark and Duncan got me straight in the motor, gear changed and thoroughly heated up. Mark even disappeared for a few minutes and came back with a half litre of milky hot coffee which went down a treat. As I set off again the first thoughts of a DNF set in. The lads stopped at Kingshouse to double check I was fine but I was shivering so they made me sit in the motor again till this wore off. Although I lost about 40 minutes here it was the best thing to do and after exiting Kingshouse I had a great shift over the Devils Staircase and down in to Kinlochleven and the final checkpoint. Final weigh in and I was good to go, although had to change pack here as it was now mandatory full waterproof kit.

The climb up on to Lairig Moor was as quick as I have ever done but the joy of that was to be short lived as once up there it was absolutely howling. Head first into a the wind and driving rain there was nothing for it head down and move. There was hardly a part for the next 6 miles where you were not going through water so much so my toes began to feel freezing. At this point when every bit of me was soaked and even my sealskin waterproof gloves were squelching my mind began to wander and a funny thought came to me which I just couldn't stop thinking about * *what good will that foil blanket do me now** I just laughed out loud, f**k the blanket the only thing saving me now will be speed as I cannot afford to get any colder. I just legged it as fast as possible to get to Lundavra, meet the crew and change gear. I didn't pause my watch here as I was just letting it go from start to finish but I am going to try and calculate my final split without the stop in the vehicle again as I did cover the final section quickly when actually moving.

Lundavra to the finish was rather uneventful, although I was pleased they have altered the descent to the small wooden bridge in the forest section as I have slipped down that a few times. My last 3 miles were the fastest of the day so still had something left in the old legs. Finish time at the Leisure Centre was 21hrs 10minutes, slower than expected but a finish nonetheless.

That one was for you DAD. 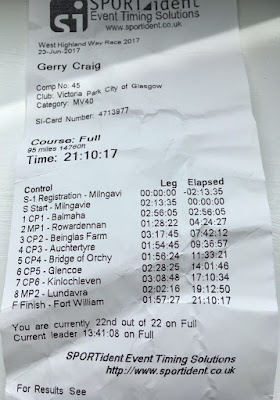 That is 3 starts and 3 finishes so think I will let it rest at that for a while and try and get some speed back in my legs.

Many thanks to to Mark and Duncan for sterling support throughout, without them I would have been out at Glencoe. To James Stewart and Rob Soutar, cheers guys your support has been immense.

To Ian/Sean/Adrian/John and the cast of hundreds of marshalls on the WHW crew thank your for putting on another great race.

To my long suffering wife and son thanks for putting up with my falling asleep at 6pm on a Sunday evening after getting up at 4:30am on my Sunday days off to get my long training runs in, you will be rewarded with a holiday which may or may not involve a race!!!!