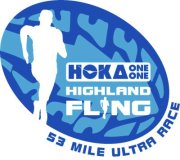 I shall start the tale today by thanking John and his wonder team of marshalls, timekeepers, stewards and sponsors for such a great event. For 53 miles the support was unbelievable and even the comments of "looking good" were convincing me I was even though my body was telling me otherwise.
﻿
A lovely clear morning as I left to pick up Chris and Michael and the first view of conditions ahead were a bit worrying as I tried to calculate how high the Campsies were in relation to todays run. 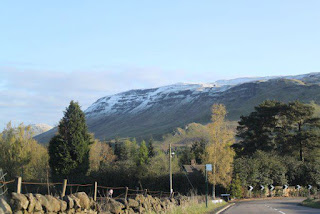 Not to worry though as it was glorious in the sunshine and the covering of snow would soon disappear once the sun got to work. Arrived in Milngavie in plenty of time to register and prepare to start what was to be my longest race yet. The female and Vet 50 race had started at 6am, my start was 7am for the V40 race which would be followed by the fast boys and seniors at 8am and the relay race at 9am. 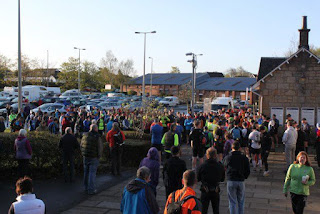 I started off at what I thought was a conservative pace but in hindsight it was definitely the first mistake of the day trotting along talking to Andy Johns. This is the flattest section and easy running compared to what was ahead. Arrived at Drymen checkpoint feeling fine but told to slow down by the crew. 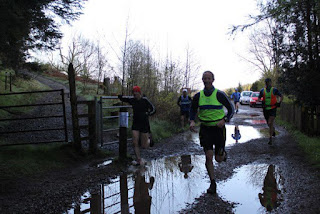 Took my camelbak onboard for this section as the rougher conditions began and now the second mistake of the day was going to contribute to the run. I had decided not to use my usual viper drink, which I have used for the last 2 years, and just filled my pouch with lucozade which now a realise was just plain stupidity. An uneventful section but stunning views as I gradually passed by 6am starters. Down into Balmaha car park and Michael was waiting with my drop bag and I downed the home made soup which I had made extra runny. At this point I could feel tiredness in the legs which was not expected at this early stage. Forced a banana and a gel down and headed off to Rowardennan.

This section is the toughest of the race as you clamber over rocks and tree roots along the shores of the loch. Not much you can do but plod on and get it over with as quickly as possible. Not long after Inversnaid the leader of the race flew past me striding over rocks while I stumbled on. The soup and banana I had scoffed at Rowardennan and then the muller rice at Inversnaid kicked in but boy my legs were hurting.
About a mile out of Beinglas Gavin Harvie caught me and we ran in together to refuel. 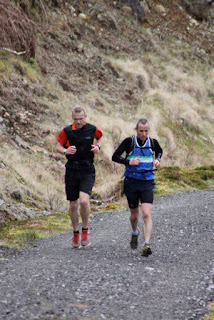 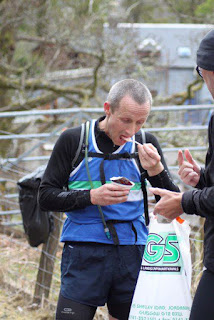 Michael ran a bit with me after this point trying to persuade me to eat a milky way but my body was not having it by now and liquids only were being accepted. So 2 gels and a can of Red Bull were going to have to get me through to the finish. The climb through the forest was slow and then the descent down to the A82 finished me off with the legs not wanting to go downhill now. 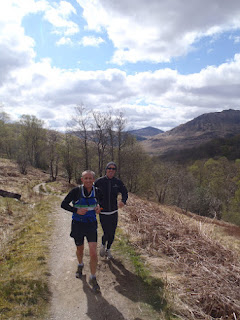 Grabbed a bottle of water as I crossed the A82 and headed for Auchtertyre nearing the finish. Just after you cross the A82 again a stream crosses the path at which I halted and washed my face and freshened up for the last mile and plodded on. A glorious sight as you round the bend and the pipers stike up and play a tune to welcome you to the end. On under the finish balloon and muster the energy to raise my arms aloft. 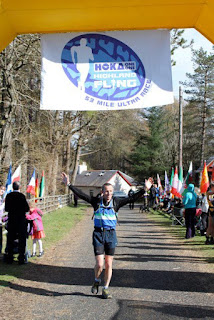 So on reflection I really enjoyed the race and the two things that affected me were self inflicted. I don't think a recce of the lochside would have helped much as that section is so bad I would not speed up much there anyway. West Highland Way Race next year? Still undecided but as I write today I am considering it again, at several points on Saturday it was a definite no go.
Posted by GERRY at 12:33 4 comments:

Last race before the Highland Fling at the end of the month so I decided on a tough road race as flat racing would be of no benefit. So off to Scone aerodrome to register for the Heaven + Hell Half Marathon organised by Perth road Runners. I ran this a few years back and it totally gubbed me for the London Marathon two weeks later so I knew what to expect and boy it did not let me down. I think this race was voted the toughest half marathon in the UK by Runners World readers. It is torture and that would be on a calm day, but it is always windy here as well. 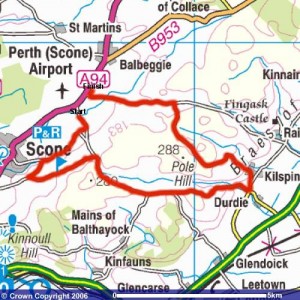 Met Chris Upson from Westerlands at the start and had a wee blether and off we went bang on time. First 2-3 miles are quite gentle but into the wind and then a left turn and the climbing begins which is where the pack broke up and the runners spread out. Mostly climbing till 7 miles with the wind at our back thankfully and then a sharp descent a short flat section then the HELL bit. 7.5 miles to 10 miles is a climb up to about 800ft and it is straight in to a very strong wind. I managed to run this whole section but it was not pretty. Water station at the top and I gulped a couple of mouthfulls down then set off downhill. 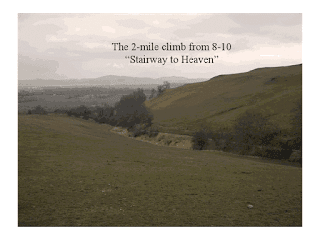 On the descent a managed to catch up with Chris about 12 miles and pass him but he was not for letting go of his position and passed me about 100mtrs from the finish.
I finished in 8th place in 1hr 27min 14secs. A great workout and faster than my last time so delighted with the excercise. Back to the aerodrome for an excellent spread of food laid on by the organisers.