As we finish off 2018 and a new age group entered the final and only second blog of the year brings to an end a year of quite honestly nothing of note running wise other than keeping the legs turning over and quite a bit of fun, some of the fun was painful but fun nonetheless and as long as I still have that in my running I will not complain.

I had a JGS relay team entered and we had our eyes on the win with a good mix of runners. The original line up had Rob Soutar on leg 2 but on Thursday night pre race he hurt his back and we needed to call in a reserve and rejig the running order. Martin Hayes on leg 1 brought us in 10 minutes in the lead (to which he apologised as he should have been faster but didnt have a good run) handing over to me for leg 2. As I had marked this section of the course on the Thursday night getting lost would not be an issue. Still in the lead at Strathclyde Park I handed over to Norrie McNeill who ran a stormer of an altered leg which was now half marathon distance to Crossford due to bridge issues at Mauldslie and he handed over to Duncan Thomson for the glory leg bringing us home in 4hrs 21mins 40secs a full 25 minutes in the lead. We now have the Craig Cup in our possession. 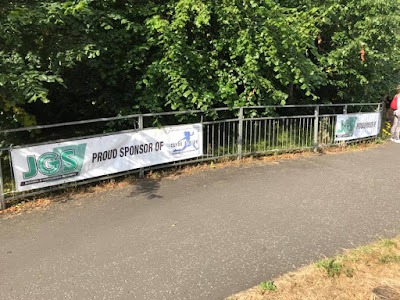 Next up was the John Lucas Memorial 50 mile race in Strathaven which was to be used as a final long training run for the Glenmore 12 hour race. There is never a large entry field for this race but on the start line were Rob Soutar, Marco Consani and Grant Jeans so pick from that a 1,2,3 and I would follow as close as I could. All went well till 40 miles and I as I left the last checkpoint both my hamstrings cramped up, not normally too much of an issue as a couple of s-caps and a drink sort it quite quickly but this took walking for 4 miles to ease by which point I had lost about half an hour of time so no chance of a good time but I soldiered on to the finish. Grant won the race beating the course record with Rob second and Marco 3rd, no shame trailing that line up with me in 4th. This sadly was the last running of the all tarmac 50 mile version of the race being updated for 2019 to only 40 miles and a mix of road and trail.

Glenmore 12 hour race
As the year progressed the realisation that apart from one race I had not been enjoying my running which I could see reflected in my training log with lots of missed runs and no focus so a decision to just get the last planned A race of the year done and then make plans for 2019. Conditions were great and I had settled in to a gentle pace but on a descent on lap 6 my right glute/hip became painfull. I gave it another 3 laps but had to call it a day at 36 miles in 5 or so hours, disappointing as I think I was leading but in hindsight a wise decision. The on course physio confirmed a glute issue but assured me it was fixable.

So onwards to November and a return to Glen Ogle to stay ever present and 8 in a row. Still not running anywhere near where I would like but progressing in the correct direction. The usual collection of seasoned ultra runners and a large number of 1st timers set off at 8am on a totally honking morning, biblical was one description for conditions at the top of the hill at after the climb out of Killin through the forest. On the approach to Balqhidder I got chatting to a couple of lads who had came down from the islands to run their first ultra and were loving the route and event, they finished just ahead of me and vowed to return and sample mod BAM events such wad the fun they had. I ran my slowest GO33 yet but still ever present and legs starting to work again.

All in all a mixed year of running but the one target of staying fit for my first year in the Vet 50 category, just need to select the races carefully and avoid races with a certain lad I train with.