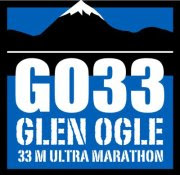 The second running of the Glen Ogle 33 and fingers crossed for as great a day as last year. Up at 5am and showered (like to start off smelling fresh) rattled down a bowl of porage and a banana and wash it down with tea and coffee. After scraping the ice off the car windscreen my thoughts were on how many layers would be required as although cold it was so far dry but as I passed through Callander it actually started to snow, not that pretty christmassy snow it was the wet sleety stuff. As I parked at Immervoulin Campsite daylight was starting to show off the snow peaked hills surrounding us and an overcast sky. 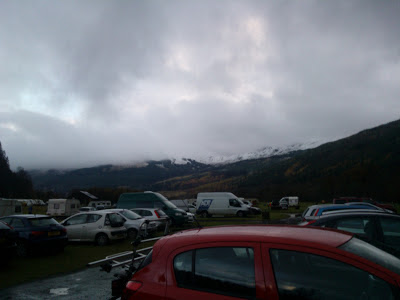 Met up with fellow VP-Glasgow runner Mark Ashby and handed in my safety form in return for my number from Julie, a regular marshall/helper/dogsbody at many ultra events. Placed my dropbags in the appropriate piles although they were only for emergency today as I had decided to run with my camelbak to save any stops. A swift race briefing and across the road for the new race start which unsurprisingly was at the bottom of a hill, last years start was all uphill but an extra mile had been added on and it is also uphill, oh well stops you setting off at a mad pace. 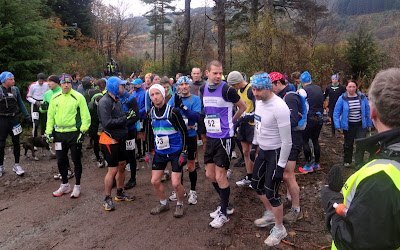 I caught up with Craig Reid and Robert Soutar with whom I have had a enjoyable year chasing and had a wee chat, Craig went on to win the race by a clear 4 minutes. The first 4 miles are just a steady uphill slog on rough forest roads before a sharp descent down onto the tarmac road at the Kings House Hotel and onto the national cycle route uphill towards Killin. I was a couple of hundred yards behind a group of 4 or 5 runners and quite happy with my pace so not too bothered not to be in a pack. Once over the road at checkpoint 2 and in to the forest the hard work begins, a couple of miles downhill then a brutal climb to the top again. This is where the hard work starts and the damage is done to the legs. For those who like their statistics from the low point in the forest at 14.11miles you are at 459ft and the climb finishes at 17.88 miles at 1179ft. From this point it is straight downhill to the checkpoint where I stopped for a can of red bull as I was starting to feel the pace and needed a wee boost.

﻿ ﻿
I was hoping to pick up a bit of speed on the return section down the track but my legs had other plans and the races from the previous 4 weekends took their toll, no pain but just a sense of tiredness. At the last checkpoint I had another red bull and set off on what I term as the road 10k section of the race. This is a rollercoaster section to the finish and where I caught John Duffy who had passed me while I was downing the red bull at checkpoint 3. He was not really up for a chat and was hanging on in for the finish so I left him to his own demons and faced the last few climbs along the quiet country roads past Rob Roys grave. Last year on this section I had to walk one of the hills but this year I was fine and trotted along to the finish over the shoogly bridge which just about throws you over and stumbled across the finish line. 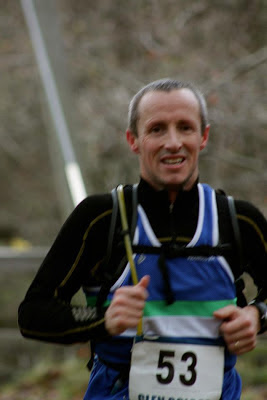 Finished in 5th place in 4hours and 27 seconds.

Many thanks to Mike and Bill and all of their team of helpers and sponsors, a truly wonderful event.

I received a letter last week with a prize for winning the Run Kirkintilloch Road Series for 2012, which consisted of 4 races which were a 12.5k, 10k,  5k and a half marathon. The link to a newspaper article is here : http://www.kirkintilloch-herald.co.uk/sport/local-sport/tale-of-the-tape-run-kirkintilloch-races-come-to-a-triumphant-end-1-2585810
Posted by GERRY at 09:39 No comments: