After a few mulled wines yesterday I foolishly agreed to a long run with Michael today out to the Falkirk Wheel. So that morning after feeling was about to be sweated out. Unseasonably warm but dam windy and fortunately blowing us towards Falkirk.
We agreed to meet at the canal at Twechar which is strangely equidistant from both our starting points although my route was hilly and his was pancake flat. No problems enroute except from Michaels rumbling tummy, least mentioned the better although it would have been a belter of a photo.
Arrived at the wheel in 2hrs and 5mins , rather brisk but it was rather windy. 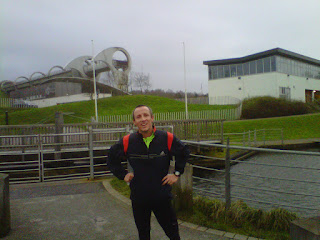 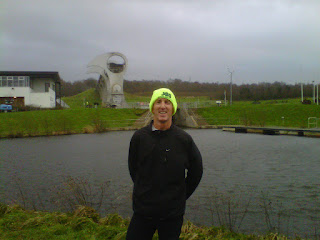 In preparation for a massive amount of eating and drinking over the next few days a long run was needed to burn off a few calories and create a wee space. So Milngavie to Balmaha was chosen as the route, about 20 miles and a good workout with a few climbs involved. 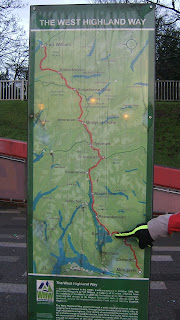 Early start at Milngavie with Michael and a lovely cool dry winters morning. Only a few dog walkers on the way out to Carbeth, maybe all the runners were suffering from Christmas nights out. The route was remarkably dry after last weeks snow and rain and the sun was peeking through the clouds. 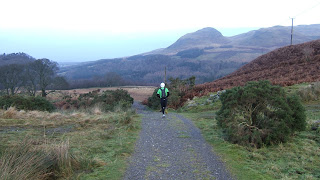 Out past Carbeth and down towards the Beechtree with the sound of gunfire in the distance, either grouse catching or turkey culling we couldn't decide. 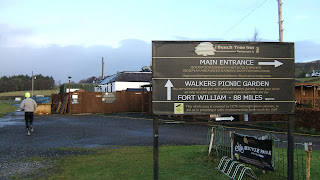 Too early for a beer at the Beechtree so on towards Drymen we go. Don't know if anyone has noticed this but there is a whole field full of black sheep, how unlucky are that family? 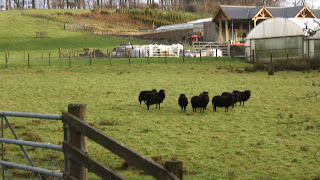 When we got to the road at Drymen a warning sign was posted on the gate saying the forest was blocked due to fallen trees and a map showed the detour to go through Buchanan Smithy along the road to Balmaha as the detour. Yeh right, how could a few fallen trees be an obstacle. Well at first it was fine as they had all been cleared by those nice guys at the forestry but nearing Connich Hill got a bit tricky and it took us about 20 minutes to cover half a mile. 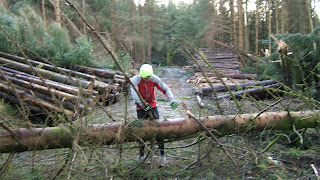 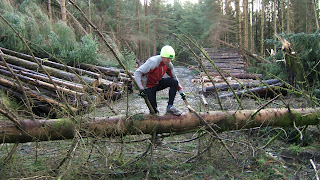 Those of you who know the old guy I was running with will understand how long this process took for a guy who cannot even touch his knees never mind his toes.

Anyhow we soon decided which tree to take with us. 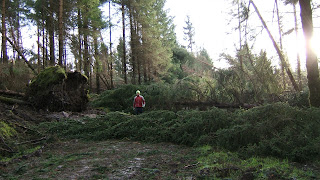 Hurricane BAWBAG has certainly blown through this forest. Finally we exited this scene of destruction and descended towards the hill, which Michael had been fearing for the previous 16 miles. 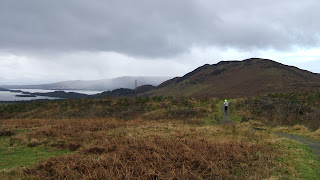 As we climbed up the hill I was focusing on my footing and not watching too far in front but luckily at one point I did or I could have been in danger of being bounced over the side. The things you see up a mountain!!


﻿﻿ ﻿﻿
I waited for Michael at the top and he mentioned he would catch me at the carpark as descending was not a skill he had a degree in, I shouldn't have laughed so much as I promptly slid and landed on my back. 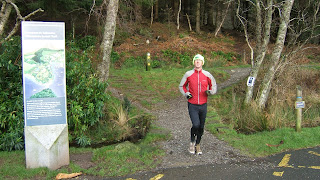 Quite a quick descent into Balmaha off the hillside and down a few stairs into the carpark. The toilet block has been bulldozed and a sign says the pub are happy for you to use their toilets so off we went to change and refresh. Great morning out and amazing December weather.
Details of run: http://connect.garmin.com/activity/135985605
Posted by GERRY at 20:18 1 comment:

As my brother has arrived from warmer climbs for the festive season our what now seems annual slidey long runs have begun. So this mornings run begun in sub zero temparature. It was -4C to be exact but clear blue skies and sunshine breaking through. I was feeling cold so I cannot begin to feel how much Michael was suffering as he was running in 35C on Friday evening and had not been back in the UK since the summer. 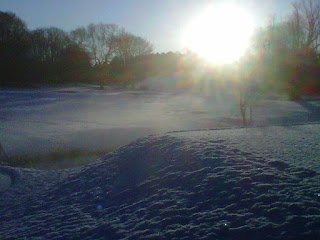 Down through the golf course and over to the back of Balmore before a bit of climbing up towards Mugdock reservoir. In the sunshine it was great but the shaded valleys were bitterly cold and damp. 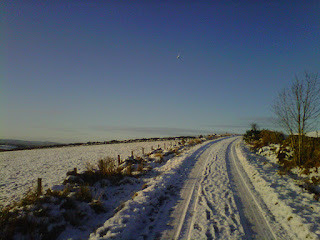 Running on the compacted snow is fine with trail shoes but on the country roads a lot of ice is forming with the water running off the fields and the madman from Singapore only brought road shoes. 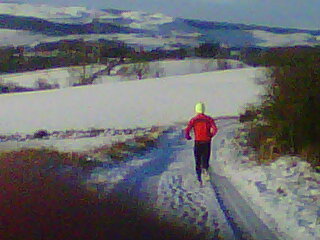 As we went around the Mugdock reservoir we met a few lads from my club so we did a loop with them adding an extra couple of miles.

﻿ We said our goodbyes and set off toward home along Auchenhowie Road and the underfoot conditions were hard packed snow. This sort of running seems to give you an all over workout as you are constantly pushing through snow and trying to maintain balance.﻿ We only had one obstacle left now, the dodgy bridge at the golf course with the closed sign at it which everyone is obviously disregarding. We slowly negotiated this, some slower than others.

Well I have gone and done it now, madness has been confirmed. Entry in and I am on the start list for the Glenmore 24 hr trail race on the 1st September 2012.

Anyone with helpful training tips on anything relating to this challenge please feel free share with me. Going to be an interesting few months of training ahead.
Posted by GERRY at 15:39 1 comment: