As preparation for the Loch Ness Marathon I decided todays long run should involve a few climbs as the Loch Ness route is best described as undulating, well for the first 8 miles it is and then a bugger of a climb at 17 miles. So todays route took me from Anniesland to Glenboig via Maryhill, Milngavie, Torrance, Kirky and Moodiesburn.
I did not want to carry anything today so planned a drink at Mugdock reservoir where they have finally fixed the drinking fountain, thank you Scottish water, and then a quick stop off in Lenzie at an offy (Off Licence) where a bottle of coke and a fudge refuelled me for the final 6 miles.
21.27 miles in 2hrs 33mins. Felt good at the end and even tried a cold bath to see if does aid recovery, shall find out in the morning on the recovery run.

As the weather was great and this race is only 10 minutes from home I decided to run my first 5k of the year.

A few familiar fast boys set off at a blistering pace and I settled in at a comfy pace planning to run an even pace from start to finish. As you come round the loch you can see the finish about 1.5km away at which point as I was feeling fine I pushed on and finished in a time of 16min 13 secs in 11th place but when I checked the distance I had only covered 4.5k. Seems a 500m loop was missed early on, ah well these things happen.

A return to road running and shorter distance for the build up to the Loch Ness Marathon so off to Pollock Park for the second last race in the vets championship. A larger field than normal as it is now an open race so a few unfamiliar faces to chase. I started off at an easy pace unsure of how the legs had recovered from last weeks Devils race so decided to wait till the second lap and see what was left in the tank. After the last climb I was still feeling ok so pushed on and passed Robert and Andy in the last mile and managed to hold them off till the end. Finished in 9th place in 37min 17 secs so happy with that and great to back on flat surfaces. http://scottishmastersathletics.webnode.com/results/a2011/
Posted by GERRY at 15:50 No comments:

Saturday 6th of August 2.30am and my alarm goes off, up and shower running gear on then force a bowl of porridge and a banana down (no mean feat at that early hour). Picked Chris up at 3.30 and the Michael shortly after then off to Tyndrum we go. The weather was looking favourable on the drive up and daylight was breaking through a low cloud cover.

On the way we discussed where and what I would be wanting at the the checkpoints and a common theme developed, salt tablets viper enery gels and water. A few miles out off Crainlarich my bladder couldnt hold out any more and a pit stop was required in a most beautiful scene at the top of Loch Lomond, when I jumped back in the car Michael asked if I had washed my hands as he was driving back and wanted a clean steering wheel, I wont tell the reply, although a pack of wipes rest next to my handbreak now so he must have a secret stash on him. I dont recall him ever producing wipes after stopping in the jungle at Macritche reservoir for a pee or a poo, must be getting posh in his old age. 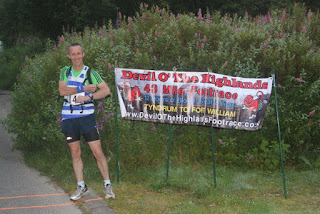 Arrived and Tyndrum shortly after 5am and collected my number had a chat with a a few familiar faces and had a coffee. After the race brief off to the start line we went.
6am and off we went uphill which was going to a common occurance today. I started off at any easyish pace 8.30min/mile as the leaders headed off into the distance. It was turning into a lovely sunny morning by the time I got to the first checkpoint at Bridge of Orchy and Michael handed me a succeed tablet and gel which I washed down with a bottle of water, as he ran beside me the cry was F****NG midgies are killing me. 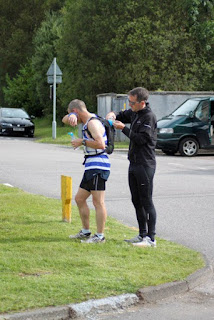 The next stage up hill and over down to Victoria Bridge then over Rannoch Moor where I met Andy Johns and had a good chat was quite easy going and then down to Glencoe ski centre for the next checkpoint where Michael and Chris were waiting with another tablet and gel and more water, the sun was now splitting the sky and I was heating up. I asked the crew to meet me at the bottom of the Devils Staircase about 4 miles away as I reckoned I would need more juice then. After crossing the A82 I headed through Kingshouse Hotel car park where Bill Heirs handed me a wee bottle of coke and sprayed it all over me which is why I got set about by the midgie population of the world, cheers Bill. At the bottom of the staircase I took another succeed as I could feel a niggle in my calf and grabbed a banana to eat on the walk up the hill. Half way up I took off my t-shirt and just left my vest on as it was now scorching, sweat was dripping off my chin and I was walking. Climb over and down on into Kinlochleven which is when it started to hurt. The steep descent into Kinlochleven took it toll on me and by the time I got to the next and last checkpoint my earlier happiness was wiltering away.

Only 14 miles to go but it was going to be the toughest. 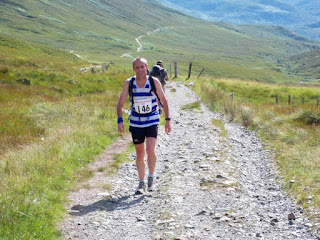 Michael refilled my camelbak with another 1.5 ltrs of sports drink I drank a bottle of chocolate milk and eat a cereal bar. They informed me they were going to meet me again at Lundavra, and thank god they did. On the climb up out of Kinlochleven I was soaking with sweat as the glare of the sun off the rockface started toasting me. This is quite a demanding section which was broken up with meeting the mountain rescue squads and walkers along the way. Michael had ran out  a bit from Lundavra to meet me and all he did was complain about the rough path, I did mention in a few expletives that it was now getting better and I had booted every rock in the last 7 miles. 2 bottles of water 2 gels and 2 succeed tablets were rapidly downed and off on the the last section I went. 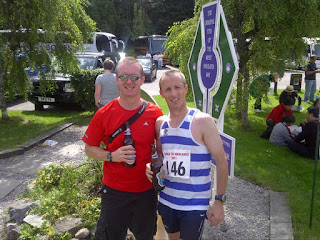 My first and only fall of the day occured just as I had to go down a flight of stairs near the end of the forest at the top of the hill outside Ft William, luckily I stopped before I went down the stairs. Out of the forest and only 3 miles to go, unfortunately 2 of which are steep downhill. My legs were burning with pain on the descent but I knew it was nearly over. After 2 of the longest miles of my life it flattened out thankfully and the pain eased, through the car park and onto the main road 1 mile to go. This was my fastest mile of the day and as I got to the finish line it actually felt great. Elated to be finished in a time of 6hrs 51mins in 10th position, happy with that on my first (and possibly last) attempt. Tiger beer time.

Thanks to Michael and Chris for great support throughout, you have passed the test and are welcome back. Thanks to the mountain rescue man with the irn bru and thanks to all involved in the race, the support and friendship were brilliant.
Posted by GERRY at 10:48 No comments: