I was asked to test out the FitSip 100% Hands-Free Hydration System and put my views down on this blog and never been one to shy away from a test I duly obliged. Basically it is an armband with a refillable water pouch inside which has a capacity of  200ml. The target customer is the runner, cyclist or walker who would normally take a bottle out with them. It is not intended for long bouts of training but those short sessions up to an hour where a mouthful or two wouldn't go a miss and keep you topped up till you finish.

﻿
﻿ So for my Monday night recovery run along the canal I filled the pouch up, even put a Nuun tablet in just to give the water a bit of taste and attached the wristband in place. The armband does feel quite bulky initially but after a few minutes I did not even notice I was wearing it, in fact I almost forgot to test it out for a drink forgetting I had it on. The mouthpiece is a bite valve and taking a mouthful was no bother at all and no leakage either. I did find it simple to use and a few regular sips over the hour were enough for me as I tend not to consume much liquid during my runs, but it is easy to take the pouch out and refill so would not be a problem in a race with water stations if you wanted to refill it. Felt like an ideal solution to carrying a bottle and keeping your hands free.

For the sceptics I was not paid for my views and only offer my independent opinion. Many thanks to FitSip for letting me try it out, it will certainly be put to use in the coming months on the trails.

Link to the FitSip website : http://www.fitsip.com/
Posted by GERRY at 08:36 No comments:

Email ThisBlogThis!Share to TwitterShare to FacebookShare to Pinterest
Labels: Fitsip 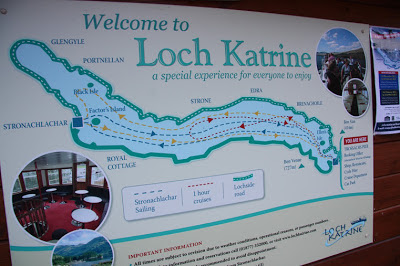 Possibly a one off event organised as a fundraiser by Audrey McIntosh for her Antarctic Odyssey Challenge ( http://antarcticodyssey.co.uk/ ) in support of Alzheimers Scotland this could prove to be something she has created which could grow and grow. Stunning scenery and a marvellous route, what else could you ask for? Well maybe a couple of degrees warmer for those poor marshalls and timekeepers. At least us runners can keep warm by exerting more energy but how I felt for those guys manning the water stations yesterday, thanks guys that was above and beyond.

The history bit about Loch Katrine is basically it is the main source of water for Glasgow and is collected here and travels many miles by gravity with no pumps involved to Mugdock reservoir at Milngavie to be filtered for us weejies to keep us clean and healthy. 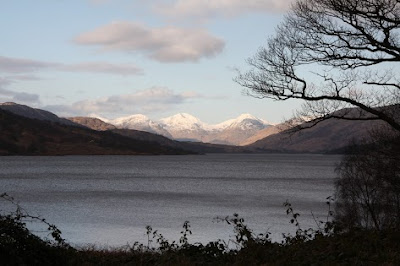 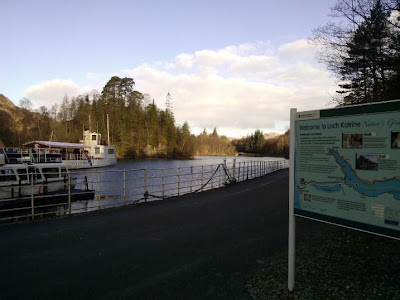 I was running the marathon as part of the training for the WHW race but there was also a half marathon and a 10k taking place. The route was an out and back to Stronachlachar along the tarmac lochside road and my plan was an even paced 3 hour marathon, simple 1.30 out and 1.30 back. That would normally be ok but as this route was undulating to say the least it was more a case of 1.30 out and see what happens on the way back. Minus 5 when I left home but it had warmed to about zero with not much of a wind for the 9.00am start and off we went.

﻿ I was in a group of 4 or 5 runners for the first mile which took 6min 48 secs and felt quite comfy and started to settle into a steady pace although nobody initially came with me and this left me leading the race until about 5 miles when Richie Cunningham pulled along side me. 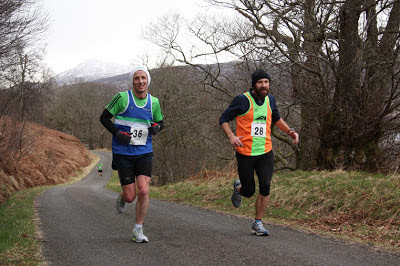 ﻿
It was a bit daunting sharing the race lead with someone of his stature but I took it as a great opportunity to pick his brains for any helpful info I could get for the upcoming West Highland Way Race. My nutrition for the day was 1 gel and 2 succeed salt tablets which proved to be fine with only a cup of orange juice at the 18 mile water station in addition. We got to half way and the turn around point in 1.29.40 and headed back the way we had come acknowledging the other runners as we went. I lost a bit of ground as I slowed to take my gel and tablets and that proved crucial in the race as I just could not close the gap again. The return half was certainly harder than the way out with the climbs steeper than on the outward section but I still manged to keep an even pace and felt strong on the final miles although every time I glimpsed Richie he was still the same distance away.


﻿ I finished in 2nd place in 3hr and 41secs so not quite a negative split but as near as I have ever got. Legs were starting to feel heavy so signs that maybe a little more juice would have helped but no cramp or stomach issues and niggle free. That was the easy week in the training schedule so back to the grind now and a few long mileage weeks now.﻿

﻿ Many thanks to Audrey and her team at this race as it was truly baltic and they must have taken hours to defrost after all of the runners had finished.

My garmin details : http://connect.garmin.com/activity/282754746  Only good to halfway as I hit the wrong button to record my split and did not actually swim any section of the race.