April was the month to see how all of the hard winter miles had paid off and first up was the Glasgow 2 Edinburgh Ultra, 55 miles flat following the Forth and Clyde Canal from Ruchill to the Falkirk Wheel and then the Union Canal in to the centre of Edinburgh. The weather was kind and it was ideal conditions as we started and I had Robert Soutar for company for the first 25 miles resisting the temptation to chase two early leaders who had shot off at a rapid rate. I knew the marathon two weeks previously would kick in at some point and just hoped I could maintain a steady pace throughout and Rob only really started pulling away from about 38 miles in.

A mostly uneventful race only livened up on reaching the second last checkpoint (Linlithgow I think) to be told I was currently in 3rd place as the first two runners had pulled out. I had Duncan Oakes in 2nd place in sight for the next 15 miles but could not pull him back in finishing 2 minutes behind in 7hrs 17 minutes, Rob had won in a superb 6hrs 53 mins. Huge thanks to Rob's mates Andy and Sam for providing support throughout the race and even taking us back to Gartcosh Social Club and ensuring we had enough beer to take the pain away from our legs.


And so on to the London Marathon at the end of the month where I was pacing again for Runners World doing the 3:30 / 8 minute mileing from the blue start. 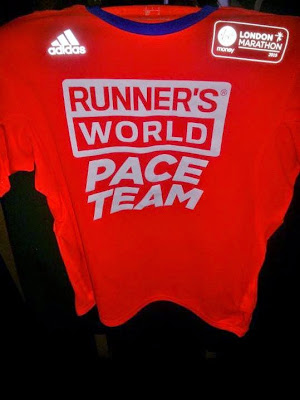 All the members of Team Craig were entered which must be a bit of a record for family members with Holly making her marathon debut and raising lots of dough for McMillan Team McKeown. Kate and myself were on the blue start and she decided after a while she had had enough of my celebrity status wearing the big flag brings and wandered off in the distance, next seen in the pub afterwards.

The race itself was fun but there was hardly a point where I could relax due to the volume of people and it took all of my concentration to maintain even splits, I was constantly weaving in and out of bodies being in the part of the race with the largest volume of runners. 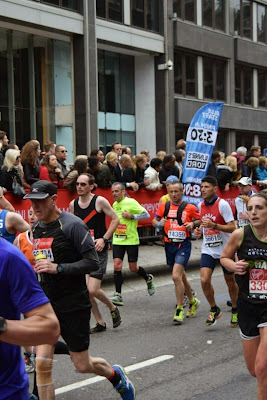 Here are my splits :

In the last 4 miles I passed 617 runners which would account for me running a longer distance with all the zig-zagging going on. A great feeling passing the 600mtr to go sign and urging the runners who had been tagging along to finish strong and reach their goals.

We all met up at our usual meeting point and it seemed we all had a good day although Kate had to pull out at halfway not wanting to risk further injury with a little niggle. I also met training partner James Stewart who had rattled a PB after months of hard work. 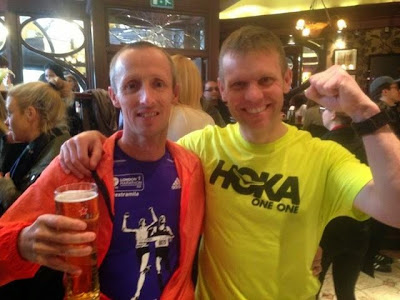 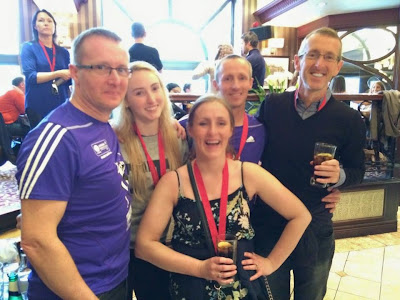