On the wind down for the year after many ultra running exploits I have been racing shorter distances to see if the burst legs could regain a little sharpness with the view of a good workout at The Southside 6. Late September to race day had consisted of two half marathons and several legs of x-country relays and I was beginning to feel a little sharper although the PF in my left foot still niggling away but almost cured.

This race is relatively low key with an entry limit of 400 which sold out in 30 minutes so securing a place at all is an achievement. The 6 in the title does not refer to how many miles long the race is ( yes a few have entered thinking it was a 10k) but refers to how many of the Glasgow southside parks you will have the joy of running through in a 16 mile loop. One thing that does become rather apparent is that park designers love to include stairways in their designs.

I ran this race last year but it was 24 hours after the Glen Ogle 33 and my legs were hurting a little to put it mildly so with GO33 being a week later an ideal tune up race if I went about it sensibly. Well sense is something which gets thrown to the side when the starter shouts go and you have a downhill start in a race. Mile 1 in under 6 minutes set the tone of the race and I shared the first 3-4 miles alongside my brother Michael but started to pull away from him nearing Rouken Glen Park. Pacing was all quite even given the varying nature of the course from trail to tarmac and the odd muddy section. I had pulled up to 5th place by the time I left Pollock Park but had to stop at the traffic lights above the M77 as they just changed and the slip road traffic was constant. This allowed Michael and another runner to pull a little bit of time back on me but I got across before they could catch up.

The second last climb of the day is a flight of stairs in Bellahouston Park and as I neared the top glanced back and caught the ominous figure of the man in black chasing me down. 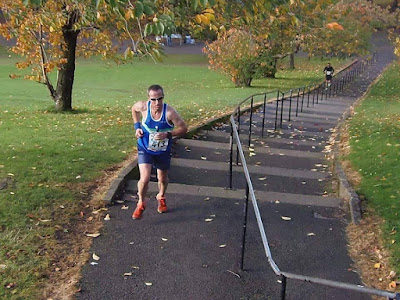 A downhill section to the exit of the park lets you draw breath after the climb with about 4km to go to the finish. At this point I must apologise to the marshalls at the park exit road junction as I came out the gates the lady shouted ok to cross but just at that moment the lights changed and the gent marshall shouted to stop. It was a catch 22 as I was half way across by then and just put the boot down and went for it . Sorry if I annoyed you guys. My pursuant was not as lucky though and had to wait while the traffic cleared. I did pick the pace up a bit with the last 2 miles being 6:15 each which only left the final climb to the flagpole. Well that climb does finish you off and I was glad to be done. 5th place in 1:42:16 with Michael in 6th 1:43:02.

Many thanks to the wonderful Southside 6 committee and team of helpers for such a great race . It is no easy task organizing such a long distance event along a busy route as many of our other road races are discovering. The food supplied at the end in the glasshouse was excellent and I imagine a few people had to go for another run to burn of some calories after the cake and soupfest. Keep your eyes open for entry for next year and be quick as it will sell out even faster.