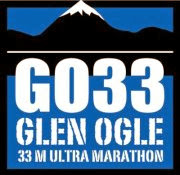 Final ultra of the year and one I was really looking forward too as it is a great low key relaxing end to the season. As is the worry in Scotland in November the weather could be rather awful but the forecast for the day was favourable till about midday with rain predicted to start after that and as I hoped to finish around the 4 hour mark and the race starting at 8am all worries were set aside and only two layers of top clothing required and no need to carry a jacket, ideal!!!!

After a slap to the head at registration from Alice for a totally innocent remark on facebook about her and Ada maybe not being available today as rehearsals had began for the panto season , can't see what she was on about as I was thinking Snow White or Cinderella. 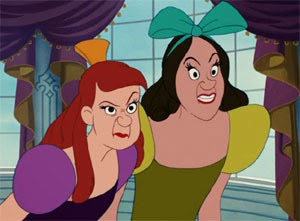 Met up with the usual suspects as we listened to the race briefing and we discussed tactics and clothing for the day and as I was thinking others were going to travel light as well. 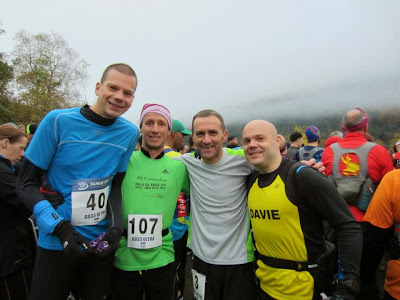 The route starts off uphill with a climb for a the first couple of miles and the lead group set off into the distance as I found my own pace and eased myself in gently. As we descended towards the first checkpoint John Duffy breezed past on his way to an excellent time. 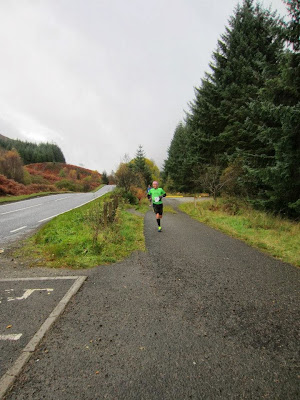 On up the cycle path to the next checkpoint and I missed this out as I was carrying my own juice today. Pete Buchanan was slowly catching me for the last few miles and after the descent to Killin came the long forest climb and as hills are not my strong point I knew he would catch me at some point here. Sure enough he did and we had a chat as we passed along the top of the forest but as we descended towards the checkpoint again he pulled away and that was the last I saw of him till the finish. I do really need to get out on trails more often as I am sluggish going uphill but even worse coming down. I met Craig Reid at the checkpoint and he had decided to pull out at this point and I couldn't convince him to come with me so off I went after a quick slug of coke.


Back down the cycle route to the next checkpoint it started raining and by the time I passed through the last checkpoint it was horsing it down and coming sideways into the bargain so it was head down and get this over with as soon as possible. The last section is basically a 10k road race with tired legs with a few undulations near the end to finish you off. I could not see anyone in front so had no target to pull in and I just tried to keep an even pace and fight off the cold which was beginning to set in. The 30mph sign and then the new shoogly bridge and over the finish line, job done in 3hr 59min 26 secs. A bit tight but squeezed in under the 4 hours, maybe shouldn't hang about at checkpoints blethering in future.

Straight away I was handed a hot coffee and it certainly sorted me out as I had cooled rapidly in the last mile or so and the sight of Grant waiting for me to give him a lift home was a picture as he was turning blue with the cold. Warm shower at the campsite and all senses had returned. 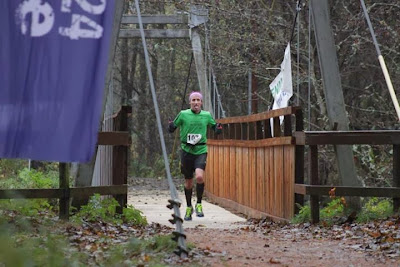 Another excellent BaM production and many thanks to the lads and lasses at the checkpoints for all their help and support on a day when the elements turned rather horrible.
Posted by GERRY at 11:27 No comments: