Time is now closing in on the West Highland Way Race start with 13 weeks to go till the big day. December and January were great training months with great weather apart from the odd wet day. My first block of training through Christmas and New Year led me nicely up to the Dubai Marathon on Friday 20th January.

Being a loving family guy I had managed to squeeze the marathon in on the way to Phuket for my summer 2016 holiday, I know it was late but better late than never. So a few days relaxing at the Atlantis Palm hotel with a few easy runs to acclimatize and catch up with family. One thing I had to compromise on when booking was Linda said her and Andrew didn't care how far away from the marathon start the hotel was that was where they were staying so I had to get up a little earlier than I had really wanted to get to the start at 6.30am. 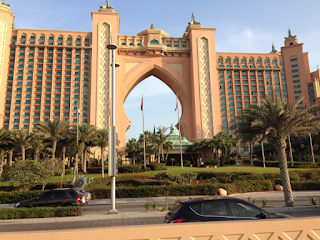 You could not get a more relaxed or easy marathon to get to the start line and I kid you not the taxi dropped me 200 metres from the start line, in fact it was a longer walk to the toilets. Michael had messaged me that he was approaching from the other side of the start line and quickly we had met up and headed for the starting pens. Unlike Berlin it was apparent we were in for a bit of a messy start as a few not so svelte runners pushed their way as near the start tape as they could. Not to worry I wasn't chasing the world record today but this did cause a problem for a certain elite runner who I had to vault over a few seconds after the start.

The race itself was rather uneventful although a bit warmer than last year at the start and really hot on the return section once the sun broke through the early morning haze. It was remarkable the amount of elite runners walking back to the finish having totally blown up enroute, gives you a good feeling to know you have paced it sensibly when you see the mess of some of them. Janet had kindly offered to hand us our drinks bottles as her and Michaels hotel was at the 13/22 mile point in the race and I was certainly in need of my tailwind on the return stretch. 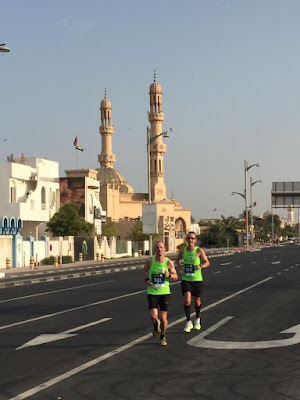 We both had good runs with Michael slowing slightly more than me in the final 2 miles fighting cramp, I crossed the line in 2:57:31 and Michael 2:57:44. At the finish we were approached by a gentleman complimenting us on our running vests which he had spied, turns out he is the boss of Frontrunner, the company I use for all my t-shirts hats and buffs. With the time only now being 9:35 am I reckoned I could still make breakfast at the hotel and with the taxi rank being exactly where I had been dropped earlier I was back in the hotel 20 minutes later and Linda and Andrew were at a table waiting for me. I managed to have a recovery scoff and then conked out on a sunlounger. 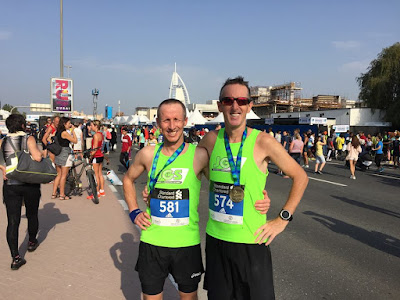 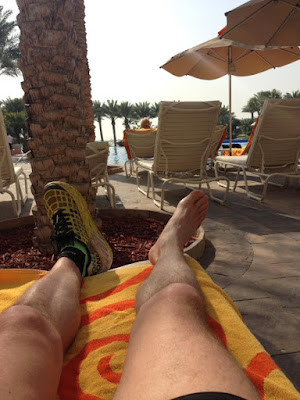 After a relaxing week in Phuket with a few recovery runs thrown in it was back home with the next race up the Kirkintilloch 12.5km, an annual test of how good the winter training has gone. As this was a long run day I tied this in with a 10km warm up over to the start and a 10km warm down after the race. Training must be going ok as I was 20 seconds faster than last year and felt comfortable all the way even in rather blustery conditions. This all lead on nicely to 4 weeks of mile building for the Loch Katrine Marathon on Sunday 19th March.

The build up to Loch Katrine had been good but an ongoing niggle in my shoulder seemed to move downwards to my glute and hamstring but I have been managing it with stretching and rolling. Training partner Rob had also been beset with injury and was on the comeback from broken ribs so we had had a good few weekend runs looking forward to this race. Raceday itself and the weather was not looking too promising but by the time we got to LK it looked like we were going to have pleasant conditions, a little wind but nothing to seriously hamper the run.

I will not go in to too much detail but this is a race which soon finds out if you are below par or not and after about 5 miles with my right leg constantly pinging away I sussed I couldn't maintain the pace required to stick with Rob and the other lad he was chasing and had to ease off and let them surge ahead in the hope I would reel them in later. Sadly this wasn't the case and I gradually lost time on them on the return leg after the turn at Stronachlachar. Rob went on to win in 2:58 and I came in 4th in 3:07 a full 13 minutes down on my winning time 2 years ago. Now is the time to get the leg seen to with bigger targets ahead, so physio this week to get it sorted.

Many thanks and lots of praise again to Audrey McIntosh and the full support crew at this running festival, such a great event from the 10k, half and full marathon. If you haven't done any of the races before stick it in your diary for next year, you will not be disappointed : LOCH KATRINE MARATHON

Sadly on the Thursday before the race I attended the funeral of great friend and running club colleague Kenny McVey who had died suddenly after a short illness. This had come as a great shock to all of us at Victoria Park City of Glasgow and I had spoken to him a couple of days before his death regarding upcoming races. Kenny was the first person I had contact with when I joined the club and I will always remember with fondness his tales when out running on our Sunday morning runs from the Allander Sports Centre. One thing he always wanted was the club to retain the original hooped vest the club had before the Victoria Park AC merger with City of Glasgow a few years back so in memory of him I decided I will be wearing my hooped jersey for the rest of the season and Sunday was the first outing. 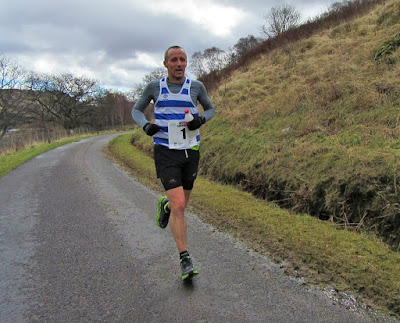