Three weekends of short cross country racing to ease the legs of after Loch Ness as a sort of taper for the GO33 on the 5th November.

West district relays at Drumpellier Country Park on Saturday 8th was a total mudbath in parts but totally enjoyable, 4k in 15.01 as part of  one of  the Vicky Park teams.

Dumbartonshire relays at Helensburgh Duchess Woods on Saturday the 15th was more of a trail race although more of a test with a 2 loop course and bugger of a climb on each loop. 4k in 15.38 and finished 4th team on this occasion.
﻿ ﻿
National relays at Cumbernauld on Saturday 22nd and the toughest course of the lot. This one has the lot, up down, mud, bog, wind, the only thing missing this year was rain but as we had already had that all week the course was sorted. An amazing and long awaited sight as our 1st team led the race on the 3rd leg but youth was caught by some seasoned runners and they finished 5th but a great prospect for years to come we hope.
As part of our 1st vet team I ran the 2nd 4k leg in 16.10, slower than previous weeks but by far the toughest race of the three. We finished in 50th place.

Cross country is by far my least favourite form of running but it is great training and if only my long suffering wife Linda would appreciate that it is not possible to come home from one of these races without the running gear being covered in mud I would probably do more of it. After Drumpellier I just jumped into the shower with the dirty gear on and washed it and myself, it then took me 20 minutes to unblock the plughole and clean the shower so its back to plan A and just use the hose in the back garden from now on. One small reminder though, do not leave the dirty shoes in the boot of the car coz after a couple of days they dont half stink the motor out as my sister will testify when she borrowed my car.
So taper time now for the final ultra of the year, GO33 here I come. 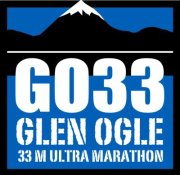 Out of true respect for a wonderful guy there was no way I could miss this race and even the fixture pile up of  Loch Ness Marathon, West District X Country and wedding reception on the Saturday evening would not prevent me starting and completing this race. When someone who gave so much to others is taken from us it puts everything back into perspective and the trivial matters no longer bother us. I have been asked a few times this year why I run ultras and marathons and I can only answer 'because I am here and I can'. None of us know whats ahead so lets get out and do it while we can.

Linda kindly agreed to drive me over to the start after the previous evenings wedding reception and with slick organisation at registration number, chip and t-shirt were all collected swiftly. The weather was not going to be kind to us today as strong wind and rain battered down.  A bit of banter with mad doctor Ewan Jack who was trying the beat the world record for a half marathon in full doctors outfit today and off we went into the wind. Slow and steady today as I had to gauge how much my legs had recovered from last week, so the first few miles just cruised by as they were mainly downhill. On into the countryside heading towards Milton of Campsie the wind was blowing from the left across open fields which meant at the left turn towards Lennoxtown we would be into the wind for a few miles. At this point my nephew Scott who was running his first half marathon cruised ahead and off into the distance I thought to myself would I see him again before the finish, answer to follow. All the way along an amazing amount of stewards and police officers encouraged us in terrible conditions, great support and much appreciated.

As you come out of Torrance and head for Bishopbriggs the route climbs for 3/4 mile up to Kirky Road and still the wind did not let up.


At the top of the hill you go right and head towards Bishopbriggs then hang a left at burger king. This was the point when we were finally given a break and blown back towards Kirkintilloch and also where the previous nights alcohol wore off and I felt like a runner again. Three miles to go and I came to life. 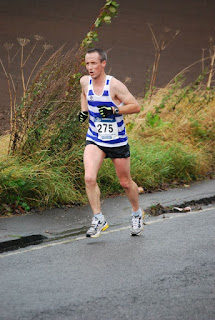 After passing the prison a couple of bends and then down Boghead Road towards the finish I rattled a couple of 6 minute miles and spied Scott up ahead but he wasnt running a straight line and I sensed he had a problem. As we turned onto Lenzie Road and crossed onto the pavement with about 500mtrs to go I pulled alongside him to ask if he was ok but one look at his face I sussed he was in a bit of bother so slowed down and ran with him, his mum would never forgive me for running straight past him. We were at jogging speed now and he assured me he would be ok so I jogged on and finished, grabbed a bottle of water and turned round just as he crossed the finish line and had a wobble so I caught him before he fell. Sat him down and made him drink then helped him into the sports centre and fed him a snickers and a packet of salt and vinegar crisps, instant recovery food. Full recovery and off to the pub for a beer, he is learning fast.

A great event from start to finish organised by Kirkintilloch Olympians and a fitting tribute to Neil.


﻿
﻿We took the long trip north for the Loch Ness Marathon in the pouring rain on Saturday afternoon hoping the weather would improve for the following morning. And improve it did to a gentle drizzle, not enough to bother you running though and ideal temperature and next to no wind.

Breakfast at 6.00am with my brother Chris and then off down to the marathon pick up point for the buses to take us out into the countryside for the start.
For those who haven't done this race a great piece of advice is not to start taking too much fluid on board until the buses are well into the journey as it does take well over an hour to get there and there is always a point along the way when you are going to have to pee, hence the hilarious sight of a convoy of buses blocking a single track country road and hoards of runners peeing in fields.
Met fellow VP-Glasgow runners Chris, Christine and Claire and wished them all the best and toed the starting line to the swirl of the pipe band. 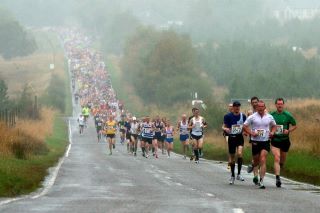 The first few miles in heavy rain but by 7 miles it had stopped and also warmed up and by the time I was on the lochside I was in a steady rythmn and cruising along nicely although alone so no group to pace with. As always with this race the first half of the race takes its toll on the hamstring with the constant climbing and descending and my aim today was to get over the killer climb after Dorres at 18 miles without any sign of cramp. As I reached the top of the climb I felt fine just as I saw a runner up ahead pull up clutching his hammy. 3 times in a row it has happened to me so I understood how he was feeling and it is a slow slog into Inverness with that problem.
No such problem for me today and the march to Inverness continued, I passed another runner just on approach to the roundabout entering Inverness and a lady shouted across I was in 13th place, unlucky for some but not for me today as I was running freely and knew the cramp monster was not getting me today.
At mile 25 I heard a cry of daddy and glanced to my left and saw the support crew and Andrew waving away proudly telling onlookers 'thats my dad'.
﻿
﻿

On into the town and over the bridge and along the finishing straight, I had not looked at my watch and was hoping sub 2.50 was on but as I approached the clock it just ticked on over 2.52. My official time was 2hr 52min 23secs, 13th position and 6th M40. My fastest time on this course so far so happy with that. Collected medal and goodie bag and headed off for a shower, then came back across to meet up with Chris and also met Chris Sheridan and both had run pb's. Great results all round.
﻿﻿﻿﻿﻿﻿﻿
Race details here:﻿
http://connect.garmin.com/activity/118670224
Posted by GERRY at 10:26 No comments: