It has been a hectic few weeks since the new year and there has been a lot of running involved which as the heading suggests has had a bit of variety in weather conditions. With a bit of paperwork overload from the previous months Mrs Wife kindly suggested/conceded that a few days in Dubai would probably do me good so within a few minutes the marathon was entered and flight booked.

I flew on Wednesday afternoon and arrived in Dubai just after midnight getting to the hotel about 1.30am Thursday to find Michael still awake after reluctantly having to listen to the belly dancer band for a few hours as they were directly below our room. Marathon eve run complete and mega breakfast we headed over to pick up our numbers at the Dubai racecourse. 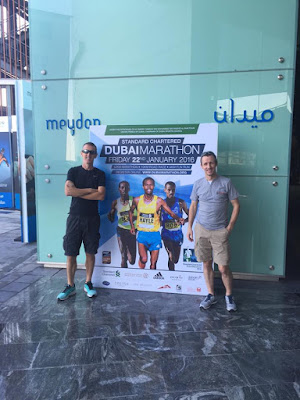 This was very low key and quick which left us plenty of time to relax and soak up some sun and rest the legs for the early start on Friday morning. 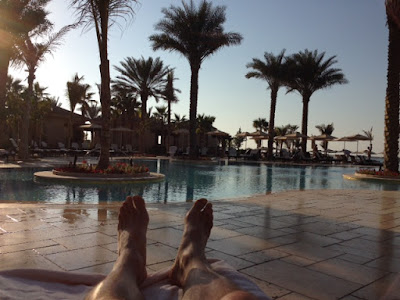 The marathon was starting at 6.30am so we had booked a taxi for 5.30am to take us along to the start but as the marathon route passed our hotel they had closed the roads and nothing could get close so after a hunt around a few streets we hailed the first taxi we could see and asked the driver to put the boot down. Panic over and we made the start with 15 minutes to spare. Not the most inspiring route in the world but pancake flat and great for even splits. We ran together most of the way and i slightly switched off and didn't realise Michael had dropped about 100 yards behind as I rounded the bend towards the finish. I slowed a little and gestured for him to catch me up but he gesticulated politely for me to move on myself. Great times for both of us with me in 2:54:44 and Michael in 2:54:59 and negative splits into the bargain.

Only one thing to do after a hot and sweaty marathon and that is REHYDRATE!!


Great couple days catching up with Michael and I flew back Saturday arriving back in Glasgow at 7.30pm on Saturday evening ready for a sleep as I had a race at Strathclyde Park on Sunday morning.

The vets relay race is a great event and the 3.6 mile loop around the loch certainly gets your lungs opened up as is evident in the following picture as I hand over to Speedo for leg 2. 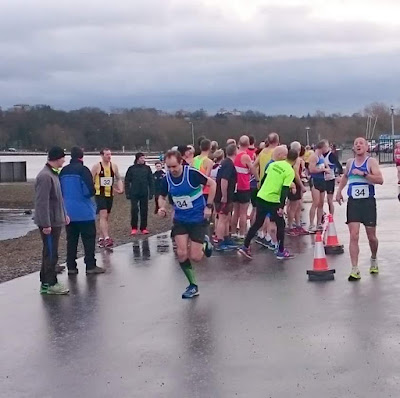 Next race up was the Kirkie 12.5km on Sunday 14th February and I ran over part of the route in reverse to the start to get my mileage in for the Run Until You Drop challenge. To say it was icy would be an understatement and I have seen races cancelled for much less but it went ahead with only a few minor bumps and scrapes. Running mate James had a particularly good race winning with a clear margin in 45+ minutes. I had a steady run but the RUYD miles are taking their tole and felt sluggish throughout finishing in just over 50 minutes.

It was a great event with 4/5's of team Craig taking part and much fun had catching up with friends from the whole running community.