THE BELATED BERLIN AND LOCH RANNOCH MARATHON BLOG AND MORE!!!!!

You know you have lapsed a bit in the blogging stakes when you come to do a review of the year and the last report was 5 months ago so I will try and be brief and catch up in as few paragraphs as possible. I like to do report on races I have done to give as much information to others who are thinking about entering the same races a little insight on what to expect.

After the John Lucas 50 Mile next up was the Berlin Marathon where I was again meeting Michael for another jolly around a city. We had both targeted this as a possible sub 2:50 and for me this was the years 'A' race having taken a step away from the ultras for the year. Unfortunately we had both been having back problems and it was apparent as the race fastly approached that it was just going to be a set off and see how it goes day. My problems got so bad I finally gave in and sought help from Matt Williamson, a fellow ultra runner and highly recommended physio. The diagnosis was actually not too bad but the fix was not going to happen in time for Berlin, in fact the fix is still ongoing but gradually I am feeling like a runner again and many thanks to Matt for getting to the root of a 3 year problem.

So the brief report of Berlin is it is a marvellous race in a beautifully friendly city with top notch organisation. From arriving at the airport to negotiating the train system it was a great weekend, and we even managed to get Andrew entered in the kids race on the Saturday which he loved.

Myself and Michael had a couple of early morning runs before race day taking the opportunity to send a few selfies and the rest of the days were spent sightseeing, eating and drinking. 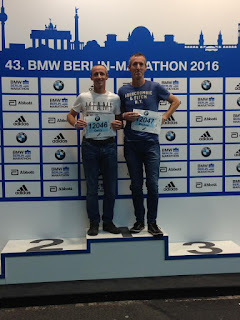 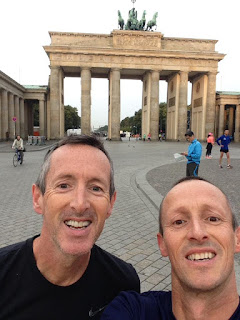 Linda and Andrew had a great time chasing German pokeman whilst touring Checkpoint Charlie and then onto Berlin Zoo whilst I discovered a love for alcohol free lager. 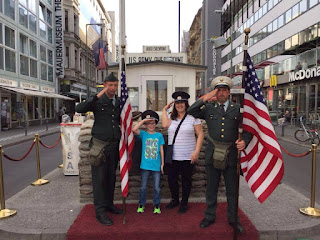 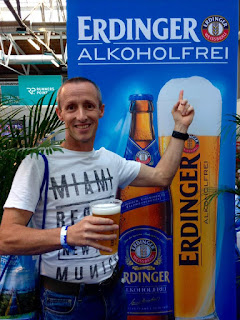 The race itself went fine and due to some great German efficiency the starting pens had the correct people in the allocated expected finish times and at no time from the start did you feel as if you were being held back by slower runners. Those who run London for example will understand what I mean here and it does make for an more even paced relaxed start. The course itself is almost flat and we ran together till just after half way when I pulled ahead of Michael. Now at no point did I see him pass me nor does he have any recollection of passing me from then but at 40km where we had planned to see Linda , Janet and Andrew where they would have juice for us if required Janet took a photo and remarkably we were almost next to each other without knowing it.

I grabbed a bottle of coke from Linda here and downed it and glanced to my right with Michael asking 'where did you come from?' 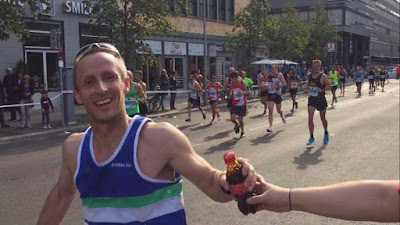 I asked if he was feeling good and fancied pushing it and as usual was told to go do one so off I plodded with little under 2km to go. Similar to London when Big Ben fails to get much bigger as you approach it the Brandenburg Gate seemed a long way off as you approach it but once under it a couple of hundred metre with throngs of cheering support you cruise down to the finish line. I finished in 2:57:23 and Michael 2:57:40 , both satisfied considering how our training had been going.

Slightly burst we headed for post race nutrition and hydration. 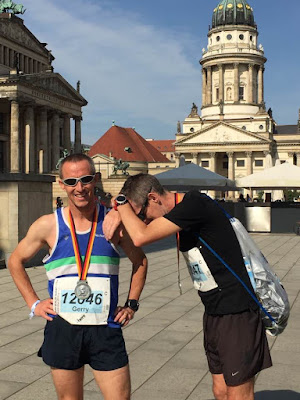 The general consensus is Berlin is a great marathon and a smashing city for a family break too, only downside would be the race entry fee which I believe is now about £120.

So next up was the Loch Rannoch Marathon which I had only entered as I was driving Catherine, and Holly up for the full marathon and Collette for the half marathon and thought why not enter the full bhuna it has been weeks since I raced. The weather was a bit blowy but not unexpected for Perthshire in October. 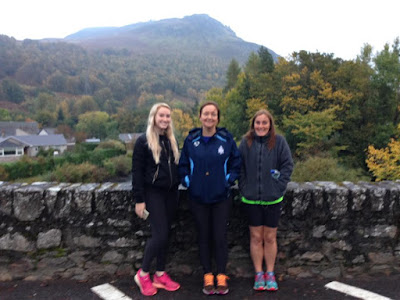 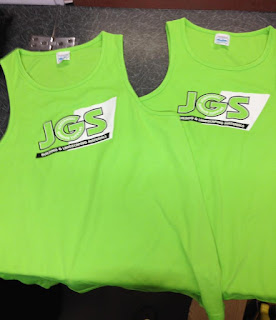 The girls were all sporting their new team vests for the race, so easily seen enroute. The half marathon runners are meant to be bussed out to halfway before the full marathon starts but the buses were late arriving so the marathon started on time with the half runners still in Kinloch Rannoch. My legs felt fine till about 12 miles when I just started feeling sluggish and Berlin kicked in. Just before halfway 2 big coaches were blocking the road and we had to divert onto the verge to pass them as the disembarking half runners made their way to the start. This meant the return leg along the other side of the loch was going to be lonely as I had been expecting to be chasing down half marathon runners but as they hadn't started obviously no company to be had and the water stops unmanned. It got a bit blowy and wet on the return and I certainly felt myself slow down but held it together enough to finish in 3:00:06. All the ladies had great runs and were delighted with their finishing times and Holly completed her charity fundraising marathon.

Bus problems aside this would also make my list of recommended marathons.

That brought the marathon count for the year to six, quite a bit for a rest year but they have all been fun and times have all been consistent although no PBs broke. 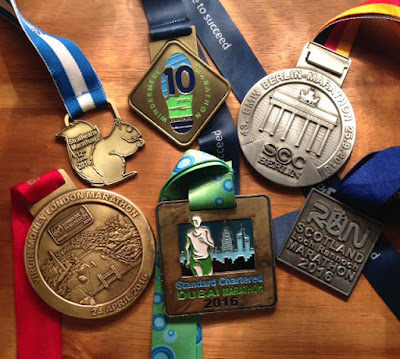 Final race of the year is the Glen Ogle 33 , my 6th year of running it and remaining an ever present. I always find the new start tough on this with a lack of energy going uphill for the first 4 miles but normally get a second wind coming down. The weather gods were kind this year although a bit cold for my liking but nothing to worry about.

Mostly the run went fine sharing a few downhill miles with Euan Craig (no relation) till he ran away from me and it was great to see all the cheery marshalls and share a hug or two. I felt a bit lethargic on the return up the cycle path and just eased off to a comfortable pace and kept it all together to finish without doing any damage. 10 minutes slower than previously but no complaints as it has been a great year of steady running.

With all that done and dusted my hope now was securing a place for the West Highland Way Race 2017 and luckily it was confirmed in the 1st week of December I had been successful. Having completed the race twice previously I have a good idea of the training involved as can be seen from the tab at the top for my previous training schedules but I am really taking this next attempt seriously and will embark on some more structured training than before. I have already started this and am on about week 7 of it with the first 'B' race of the year 2 weeks away at the Dubai Marathon on the 20th January. The second 'B' race will be the Highland Fling in April all structured towards the 'A' race for the year in June, Milngavie to Fort William 95 miles of fun. There are a few other races in between the main races but I will be treating them all as training and will build them in to the plan.

Sadly I have declined my London Marathon pacing slot for this year as it is the week before the Fling and my new found sensible head ruled the pacing out but hopefully I will return next year although if something does go awry I do have a good for age slot which can be deferred right up till race day.

So that is us all caught up and I will not leave it as long from on in, monthly updates will be appearing with hopefully the Dubai report at the end of January.

Hope you all had a great Christmas and New Year and look forward to catching up throughout the year.