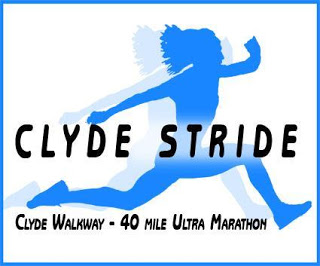 Realising I would most definitely not be up for a full race 3 weeks after the WHW race I opted for the next best thing and with a bit of forward planning entered a relay team for this years Stride, not just any relay team though as this was a team which only had the choice of 4 runners,myself and brothers Michael and Chris with little sister Catherine. Team Craig had no reserves so any thought of withdrawal from either of my two brothers or younger sister were going to be a disaster but they had been briefed and were all up for the task. We have only ever all been at the same race on two occasions, Paisley 10k a few years ago and London Marathon 2011. Four runners from the same family and all with different clubs.

A brief description of the route with those unfamiliar with the course : Start - Partick , Finish - New Lanark .
40 miles following the River Clyde upstream along cycle paths and various degrees of trail and a little bit of road.

In the run up to the race temperature in Glasgow had been hitting mid 70's and far from ideal for us locals but surely more enjoyable than the longest cold winter which I can remember and we were next to a river after all. Kate and Chris had not ran any of the route before so a couple of recce runs did take place on their individual legs, although maybe leaving Chris's till the Thursday evening before the race was a tad last minute but most enjoyable as we relaxed outside the Toby Carvery with a few beers contemplating the race 36 hours in the future. 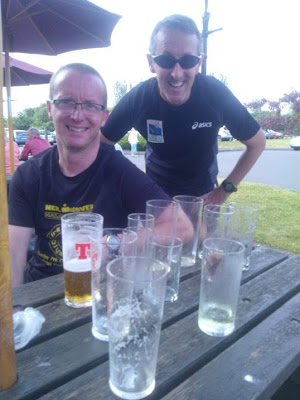 Race morning and Kate was a little nervous about pacing and the temperature was rising but she ran the first leg well and we were within 25 minutes of the Sweatshop ringers at the first checkpoint. Chris was off like a bullet ( alright a bit of an exaggeration after his all inclusive 10 days in Portugal). He did make me a little nervous when he asked for his inhaler just before he set off. Not sure if it legal but lots of medal winners from the last Olympics seem to be using them so not a problem as long as we don't win.


Chris made good time and and pulled back one of the Sweatshop teams who had went the wrong way somewhere although I do not think he was the only one going by reports. It is always a benefit if you are certain about a route. Michael set off from Strathclyde Park and we drove along to the next checkpoint where I was going to be taking over on the glory leg, well if you are leading it is. Mauldslie Bridge is a lovely setting and you can see the runners coming round the bend in the river and a few knackered looking faces passed by. We were in 5th place when I set off a full 24 minutes behind the leader and as I was chasing Gavin knew I would not make that up but hoped I could maybe reel in second third or fourth. Alas it was not to be and as I was on the loop round New Lanark on the way to the finish I could hear cheers and shouting, which turned out to be the race for 2nd place. I was pulling them back in but ran out of distance. I was shouted over the line by Michael who was eyeing the time and urged me on to go under 5 hours which I just managed. Our final time was 4hr 59min 44 secs , 5 minutes off of 2nd and 19 from the winning Sweatshop team.

So possibly the fastest all sibling relay team in the west and a great event to be part of.

Another excellent race organised by Lee and one of the friendliest you will find anywhere.
Posted by GERRY at 17:48 No comments: