It has been a few weeks since the last blog and time seems to be just speeding away this year. My plan for the year is a fast marathon in Berlin to see if I can go under 2:50 and that has been the target for many months and the reason for entering so few races this year. Well that was the plan but a look at what I have entered for the next few months and what I have completed already I may have slipped up a bit but if I am fit I will be fine.

After London the next marathon up was Brathay Windermere but the small matter of the Monklands Half the week before to get the legs back up to race pace. Monklands is great local half organised by North Lanarkshire Council Leisure Dept and is superbly organised on a testing two and a half lap loop around the perimeter of Drumpellier Park in Coatbridge. I was accompanied by my brother Michael and little sister Kate for this one and knew Michael was in good shape for this with the Berlin target also on his radar. Race weather was perfect and we were treated to a beautiful day for running. A bit of cat and mouse for the first few miles till positions evened out and it was left to Michael to try and make up the 30 second gap I had opened with a mile to go, but he knew when I glimpsed him going round the last turn out of the park he wasn't going to catch me and we finished in 10th and 11th place is in 1:21:36 and 1:21:56 respectively with Kate having a comfortable finish in 1:56:50.

Next up was Windermere and a little extra race with no target time as it was actually a stag weekend with a fun run added for a laugh. Gavin Harvie had arranged the weekend for a jolly before his nuptials in July and as runners were travelling from around the country this just seemed to be the central point. Several of the guys had travelled down on the Friday but due to work stuff myself and Michael travelled down on Saturday afternoon accompanied by Duncan Thomson.

Needless to say much beer was consumed and pre marathon curry consumed so I was feeling rather fragile on the start line on Sunday morning in the grounds of Brathay Hall at the head of Lake Windermere. With delicate head and guts we set off and it was apparent this was going to be a toughie early on although it didn't seem to affect Cris Walsh as he shot off like a greyhound out of a trap, maybe forgoing the stag do and travelling down on race morning was a sensible idea.

As marathon routes go this one is beautiful with some outstanding scenery and definitely a professionally organised event. I set off with Michael with the intention of running together as long as possible but I gradually pulled away from him as he felt a few of the climbs but as we reached halfway point he pulled alongside me and we had a mile or 2 together before more climbing began on the way to Ice Cream Hill at 21 miles, where if you fancied a stop for refueling after yet another hill ice cream could be had. Gavin, Lee and Kelvin took another course of action and stopped earlier at a pub for a pint. I realised a sub 3 hour run was slipping away but kept up an even pace but with a mile to after going over a short humpback footbridge the volcano of beer and curry still rattling around in my guts decided it was time to make an appearance and much to the spectators delight I deposited the contents of my belly on the roadside. This gave Michael a lift as he rounded the corner to see me only a short distance up the road but with only 500 mtrs to go not enough distance for him to catch me on the final climb. 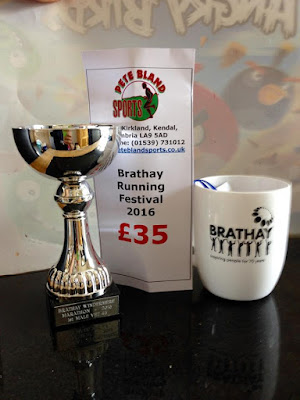 The rest of the stag party trundled over the finishing line in various states of disrepair with us heading straight back home and Gav, Lee and Kelvin staying to celebrate some more.

Next up was the Strathearn Marathon, yet another hilly one and only a few weeks recovery which also include a 33 mile recce run on the Clyde Stride route so no big expectations for this but hoping still to get in around about the 3 hour mark. I was nominated driver for the day collecting Julie McFall and Robert Soutar and arriving in plenty of time at Cultybraggan Camp on the outskirts of Comrie. The weather for the race was a bit wet and blowy but ideal running conditions. Robert was wanting a sub 3 hour time to apply for Good For Age in London next year and I had planned to run with him but it became apparent as we started the 7 mile slog uphill my legs had not recovered from Windermere so had no option but to watch him disappear off in front on his way to a superb 2:53:43 finish.

Julie was not expecting too much from her marathon for the year due to a couple if niggling injuries but she too had a great strong run finishing in 4:05:39. My run turned in to a great training run for the Stride and I rattled out even splits finishing strongly in 3:01:09, although over the 3 mark it was unscathed. Another marvellous race which gets even better when you finish with an outstanding food spread laid on by the Strathearn Harriers and local community.

A highlight of the year is the Clyde Stride Ultramarathon, 40 miles from Partick to New Lanark along the River Clyde and this year a lot of friends were coming in from all over the world to help celebrate Michaels 50th birthday on the 17th by taking part in the race and also a team entered from MR25 Michaels club in Singapore. Myself and Robert had shown Kevin ODonoghue the route a few weeks previously on a 33 mile recce run so I knew who the competition for placing would at least be coming from with those two racing.


Race morning and it was a wonderful atmosphere with visitors from afar and lots of other running and marshalling friends all congregating at registration and then the start line. My own race strategy for the race was carry nothing apart from salt tablets and a solitary gel in case of emergency and pick up a bottle of tailwind/water mix at each checkpoint.

Straight from the start the race was fast as Grant Jeans, Rob and Kevin shot off at a pace of  around about 6 minute miles which was just not in my plan so I watched them gradually pull away hoping my own pace(which for miles 1-9 averaged 6:45 per mile) would keep me in contention later on. There were 2 other runners ahead of me one of whom I passed just after the long grass in section two which left 3 known to me and 1 other wearing a GREY t-shirt. As we exited Strathclyde Park Stephen Schofield had mine and Robs bottles instead of us getting them at checkpoint 2 and as I got there Rob had stopped and decided to pull out of the race so that left Kevin, Grant and the GREY lad in front now. On entering the cowfield (Barrons Haugh) I glimpsed Grant and steadily reeled him in for the next 3 mile passing him with about 3 miles to go to the checkpoint 3. Now 2 in front, Kevin and a GREY t-shirted runner.


After checkpoint 3 my belly decided it was time to empty and I threw up all the juice and two salt tablets I had downed at the checkpoint but luckily I had the foresight to have left two bottles there and was carrying the extra one so took it easy for a mile or so and had another two tablets and slowly rehydrated. This is a tough section on tired legs I was really starting to slow down and had no idea if anyone was within touching distance till just before the new bridge at the pumping station where Davie who informed me I was catching the leaders. Davie offered me a gel but I declined as I wanted juice but he didn't have any but I knew the shop in Kirkfieldbank was only a mile away so not a problem I would get some there. As I approached the gate on the small climb to the road in to Kirkfieldbank  I caught sight of a runner but he was wearing a bright green t-shirt so presumed he was a relay runner and never gave it much thought even almost catching him as I went in to the shop and bought a bottle coke.

The shop stop took about 2 minutes going by my watch splits and I carried on hoping no-one had passed while I was in there. After safely negotiating the down then up section I exited onto the downhill road towards the finishing loop and again saw the GREEN t-shirted runner about 250 metres down the road. Carrying on around the final loop and through the hole in the wall I crossed the line to a hug from Lee to be told I wad 3rd place, about 1 minute behind 2nd and 6 minutes behind the winner Kevin. The lad in the GREEN t-shirt was 2nd place, so close to him but unaware I hadn't chased him!!!! Didn't get the chance to ask him but somewhere he must have changed tops.

The rest of the visitors all had a great day running the race and I am sure a few will be back to take the challenge again in the coming years.


Race director Lee McLean puts in an amazing shift behind the scenes to offer us such a great race and both Michael and myself through our companies chip in a little and help wherever possible but even we were amazed when the prizegiving began and Lee announced there was now a trophy being awarded for the winning relay team which she has named the 'Craig Cup' , it is only now I am glad she hasn't had to call it the 'Craig Memorial Cup' .  I am sure the competition will now intensify for that particular race going by online comments!!!!!! 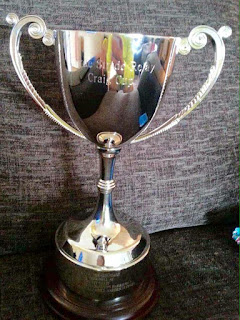