PACING AT THE LONDON MARATHON 2016 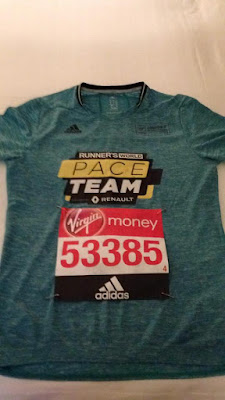 After the disappointment of pulling out of the Perth 100km at halfway I had been working on the injury and taking things gently enough to be fully prepared for my 3rd year in a row pacing at the London Marathon. The previous three Sunday long runs were 20+ miles @ 3:30 marathon pace and had all gone relatively comfortably although quite a bit of concentration required to ensure the splits were as even as possible. When you tend to do all of your long steady runs at approximately 7:15-30 minute miles this is not as easy a task as it sounds but I was confident I could pull it off. My race clothing had turned up on the previous week so I had enough time to wear it a few times and break it in although I opted not to use the Adidas Ultraboost running shoes on race day using my Hokas instead for a little more cushioning as the foot repairs.


Race week was hectic at work and I had to work on Saturday morning which was not a problem as Michael had offered to collect my race number and backpack/flag for the race as he was flying down on Friday. 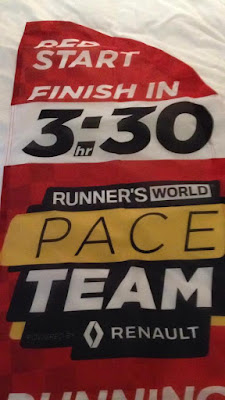 The flight down to London and underground to Green Park negotiated easily I met with Michael at the hotel and we set off in hunt of dinner. My favourite  pre-marathon meal is steak and chips with a couple of beers and astonishingly Michael decided he was going to follow suit and have the same as me for a change ditching his pasta and veg regular nonsense although his was washed down with fizzy water.

Fed and watered we headed back to the hotel and I set about organising my kit for the morning which thankfully was all present and correct as it was now after 9pm and not much I could have done if there was a problem. It all sound easy just disappearing to London to run a race but I had not stopped since 6am and had put in a half shift at work as well.

Not too bad a sleep was had and I could have just rolled over and went back to sleep when the alarm went off at 5:45am. A brief glimpse out the window and I could see today was not going to be the nicest weather day ever on gods earth.

I caught up with a large group of fellow pacers for a photo opportunity pre race, in total there are 43 pacers all tasked with helping fellow runners achieve their goals. 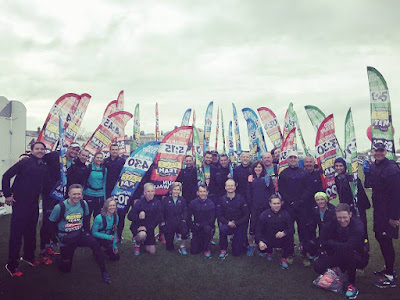 As pacers we get no preferential treatment and we follow the same race rules as everyone else so off we all headed to our individual starts and went through the usual rituals we would do if we were not pacing. What I now know is the red start has a particularly large amount of trees which a large flag can strike and the baggage trucks are as far away from the start as they could possibly get them, I must have been privileged on my previous red starts on the Good for Age start. This was my 12th London marathon and has got to go down as the coldest ever, it was really cold considering it was late April and I just wanted to get moving to heat up. There was a lot of great banter whilst waiting in the holding pens and several runners told me they were going to stick with me as long as they could.


I crossed the start line with 2:39 showing on the official clock so had to remember to deduct that from there on, easy at first but after a while the brain starts to wander and with all that is going on around it is rather difficult to remain focused. Glimpsing back occasionally I could tell there was quite a group concentrating on my flag and the miles ticked away nicely chatting to runners hearing their stories and goals for the day. There was hardly a section of the whole route which was not lined with spectators but one fellow stood out about 5 miles standing alone preaching from a bible, don't think he was too impressed with all these folk enjoying themselves on the lords day. 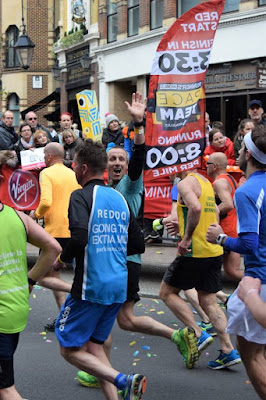 Unfortunately the signal on my Garmin went wonky somewhere around Canary Wharf and I clocked a 5:20 mile and my distance jumped by half a mile meaning I couldn't rely on it anymore so had to resort to auto-pilot and the course clocks, which is where remembering the 2:39 comes in handy!!. I kept on track and as I headed along the embankment with 2 miles to go started encouraging folk who had been with me all the way to push on for the 3:30. One lad who had stuck on my left hand side since halfway was beginning to toil and he couldn't respond much to my words so I slowed a little and told him to just sit tight next to me. I was close for 3;30 but this held me back a little but I was happy the group following had all pushed on a little and were going to hit the target. 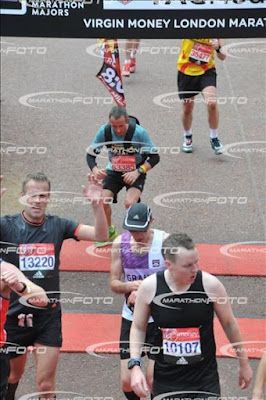 Approaching the line I could see I was over 3:30 which was not an issue as the pacers remit is to ***ensure you pace a maximum/minimum of 1:30 either side of target time*** and my official time was 3:31:10 which also include almost wiping the clock and gantry out and having to stop and go back a bit to duck down and attempt it all again.

It gets quite emotional afterwards with folk coming up and thanking you for helping them along and it is a great feeling seeing the delight in peoples faces and emotions as they cross the line.

As is customary after the marathon a quick catch up and a couple of beers with my brothers before shooting back to the airport and flight home, a whirlind weekend and job accomplished. 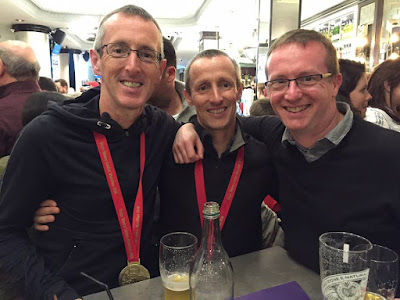 For those with a keen eye for detail below are my split times :