As I had been on the reserve list for a while this was not the main focus of the training recently but about 3 weeks ago I received an email offering a place which was quickly snapped up thus changing the plans a bit for racing the Clyde Stride changing that to a more 99.5% effort rather than 100%. So back up crew organised and a very miffed wife told that a 3am wake up call was the order of the day. When the midge net/hat arrived the comment was "no way am I wearing that", prompt reply from me "honestly you will thank me".

We arrived at Tyndrum in plenty of time for registration and managed a coffee and toilet break and promptly started racing bang on 6am in glorious weather. My main objective today to set off steady and keep a little in reserve for the 'death march' section from Kinlochleven to Fort William, this being the section where it all went wrong last year. The first section to Bridge of Orchy is relatively flat and I strolled along enjoying the day and met the crew who handed me my juice and a gel and off I went up the hill through the forest and down the hill to the hotel and on to Rannoch Moor. This is a long lonely stretch when you are running alone so I just ran along keeping a steady pace making sure I didn't push it too early on. My plan of taking it easy was undone as I reached the Glencoe checkpoint before the crew had arrived. I was a few minutes ahead of schedule but as they were nowhere to be seen I just carried on to Kingshouse Hotel hoping they would be there instead. Well that hope was extinguished when they were not to be found here either and I was going to need more juice soon for the climb up the Devils staircase so I pulled my phone out and tried calling them but no answer on either phones.QUESTION: What to do at a moment like this when the runner worries that his crew could be in trouble? ANSWER : Take a photo and carry on running. 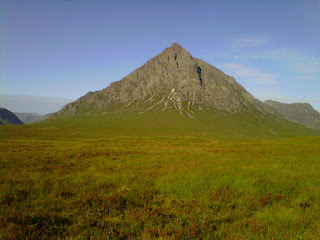 On the approach to the staircase Chris was waiting at a gate and explained the had parked at Glencoe ski centre and were walking down the hill to the checkpoint as I had went through so after confirming this with the marshalls had to hot foot it back up the hill, miss out Kingshouse and head straight for the staircase. Linda handed me 2 s caps a gel and 500ml of water with a nuun tab added all of which were downed rapid, requests for Kinlochleven given and off I went up the Devils staircase. Decided the best option for this was walk most of it as it really is of no benefit to run it. As I neared the top elite runner Gareth passed me and he was actually running it at quite a pace, quick pleasantries and off he went into the distance, I was impressed how fast he disappeared into the distance, although unsure why he was actually behind me. Right at the top I got cramp in both calfs and hamstrings, I think due to not getting my juice at the correct time but I knew it would ease once the salt tablets kicked in so just carried on and hoped for the best.

Onwards to Kinlochleven and as the cramp eased I really started to enjoy the run and the scenery, it was just such a beautiful morning to be up on the trails. Took the descent gently and arrived in Kinlochleven to a waiting crew with everything to hand. Half a banana consumed (the only solid food of the race) another 500ml nuun mix and camelbak refilled and Chris offered to carry a bottle of water up the hill a bit for me. I shot off and presumed he was following but turns out he went to change his t-shirt first and I was off round the corner. He caught me as I was walking up the brutal climb on to the Lairig Mor and said "here's your water I am not going any further up this bloody hill". I did explain this was only a quarter of the climb but he did offer to meet me at Lundavra. At the top I met Gareth who was not in a good place and he mentioned he had had enough, I think he pulled out here (maybe not the best plan to run up the Devils Staircase).
On to Lundavra and still feeling good but glad to see Chris and Linda who offered a can of  red bull which did not even touch the sides. Last stretch through the invisible forest to the top of the hill and unlike last year legs that could actually run downhill, what a relief I had actually paced myself for once. Downhill for 2 miles and 1 mile flat along the road to finish. 5th place in 6hours 33mins, a PB by 18 minutes and feeling tired but not the wreck I was previously. 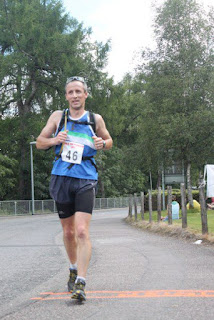 To my back up crew many thanks for a day out of your lives, I will willingly return the favour if you wish to enter. One question though : Was the delay at Glencoe due to waiting for 2 rolls with links sausage????

Many thanks and best wishes to the Devils crew for such a superb event, organised to perfection.