So finally I find time to pen a few words regarding my last three races. After the West Highland Way Race I had been feeling extremely lethargic in my running and my mojo had most definitely done a runner. Every run was a chore and even getting over 10 miles in a single run felt like a real effort. By chance I was driving home from work and spotted the familiar stride of Rob Soutar ahead on a road in Gartcosh. I pulled up beside him and we had a catch up blether and he enquired if I had space on my relay team for the Clyde Stride as he fancied a race but not the whole thing and luckily for him we had had a withdrawal so straight in he went. I submitted my final team line up to Mrs Mac a few days later as requested and received a knowing nod and and a wink as she clocked my team of 'ringers'. Team JGS was made up me , Duncan Thomson, Alison Kerr and Rob all customers of ours so genuinely part of the family. 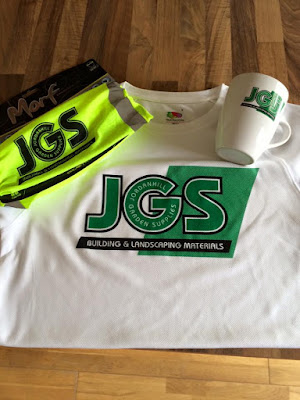 Alison ran the 1st leg before heading home on little guy duties as Duncan pursued the leading Sweatshop team who had a racing snake on their 1st leg. He duly brought us in in the lead at Strathclyde Park where Robert took over with only two runners ahead, James Stewart and Robert Turner who were pushing along at course record speed in the individual race. Robert arrived at Mauldslie Bridge still leading and I headed off on the glory leg with one instruction ringing in my ear 'go on and win it' . Not wanting to let the team down I didn't let up and put in an even faster last leg than last year when I had been pulling in all the teams in front, but until you see the finish line you still think a speed demon is chasing you down. I think we got to New Lanark well ahead of expectations as Rob had been sent out to put up direction signs and was still putting them in place as I came down the hill into the village for the final mile loop. Managed to hold on to the lead on win in 4:24:09 with the next team coming home in 4:31:05.

The individual race record was meanwhile being smashed by good friend James Stewart in an incredible 4:39:40 , an amazing time on a tough course.

My brother Michael having dropped out of the relay team in favour of a full race slot had a great run considering only JETTING in to the country 24 hours previously and loosing his emergency fiver which he had needed to purchase a bottle of coke at the wee shop in Kirkfieldbank. 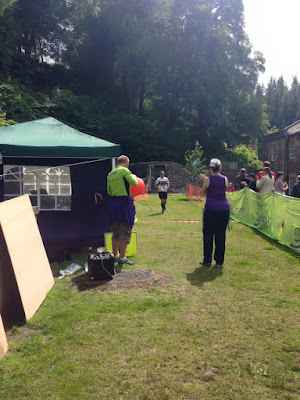 Congratulations again to Lee Maclean on a magnificently executed race, from start to finish everything ran like clockwork and it is a beautiful finish location with some stunning scenery. 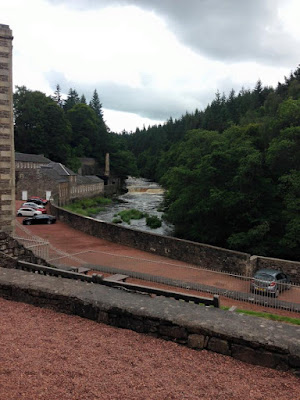 Onto Sunday 16th August and the longest tarmac roadrace in the UK, the 50 mile John Lucas Memorial Round Strathaven Race. This had been a target for the year as I really do prefer tarmac to trail and with a growing race entry and relay race too it is proving to be a popular feature. Rob Soutar had entered late on and I knew I would have to put a shift in to challenge him never mind who else turned up. Perfect conditions welcomed us in Strathaven and it was surprisingly totally calm on the wind front as we set off. Myself and Rob settled in just behind Grant Jeans for the first leg discussing how we felt our day may pan out. As we reached the checkpoint I changed my drink bottle from a dropbag and as I crossed the road noticed Rob up his pace and start pulling away from Grant. Now I know it was a race but at mile 10 I just didn't think it wise to stick a sub 7 mile in so let him go off in the distance thinking I would see him at the finish. I sat behind Grant for a couple of miles but felt he was slowing so pushed ahead at mile 13 and put a 7:05 and 7:09 mile in and never saw him again till the end where I learned he had pulled out at 30 miles. At checkpoint 2 Helen Munro advised me I was about 5 minutes behind Rob and as I got to checkpoint 3 I was told it was 13 minutes. The first of the relay runners passed me here and it was great to finally have a bit of talk with someone after a few lonely miles. By this point too the cycle sportive which starts a couple of hours later started to catch up and the route became a lot busier.

Checkpoint 4 is where the race and catchup began as on reaching here I stopped and replaced my drink bottle and downed a bottle of coke to see me through the final 10 mile section. Davie Mooney asked how I was to which I replied fine although maybe slwoing a little no real fatigue. I enquired as to Robs whereabouts and he answered 'about 2 minutes ahead just around the corner and struggling' . So off I went and sure enough saw him as he made the climb towards the Whitelees Windfarm. I caught him at 42 miles and we had a talk and discussed how our legs were feeling and what was left in the tank. Now if this had been any other runner a quick hello would have sufficed and I would have put the boot down but as I train with him I just felt we should maybe run a bit together and help each other along. For the next 8 miles we pushed each other to our limits going from 8:40 per mile down to 7:42 and 7:33 in the last couple of miles. As we approached the finish line we were both spent and crossed the line together in 6hrs 38 minutes both posting PBs for the course. We did draw a bit of criticism for not racing to the line but after such a long distance it did seem a little irrelevant. 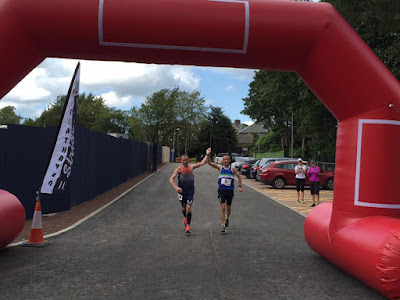 Race director David Meldrum has grown this event so much in the last few years and will be badly missed after stepping down with Rosie Bell taking over the reigns for next year. Many thanks to all the marshalls and time keepers for your generous support it is warmly appreciated.

The lovely Angela Barron sent an revised copy of the finish line photo which I have been instructed to use : 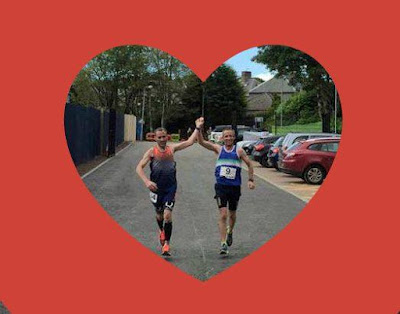 Next up was the Glenmore 12 hour race, part of the G24 running festival which is part of the BaM series of races. Based at Loch Morlich just outside Aviemore you have the choice of 12 or 24 hours of running a 4 mile loop around a forest full of midgies  and for this year the addition of a 24 hour 4 person relay team.

This year again we had the dream team support crew of Sarah Self  and Andy Stewart, who would be supporting myself and James with the addition of 3 other runners including my brother  Michael who had JETTED in again for some more ultra pain infliction. Sarah and Andy kindly arrived in Glenmore 24 hours early to set up base camp and pitched at the same spot as last year. I picked up Michael and James early Saturday morning and headed to Loch Morlich stopping off enroute in God knows where for coffee and bacon rolls. On late arrival we were seconded by Sarah who was stressing a little with the pressure of 5 runners and not one registered by 11am. We had also decided it would be a laugh if we left the filling in of our medical forms till registering just to see the look on Adas face, what a f##king hoot!!! Great to see so many friends again at the main tent and briefly catch up before the serious stuff began. 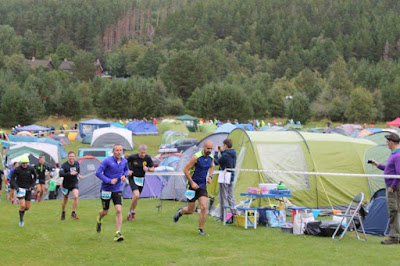 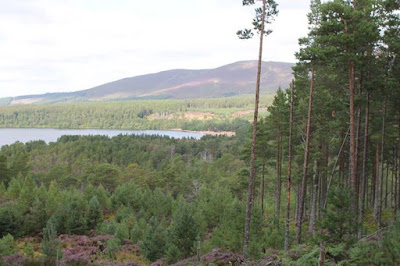 The race started with ideal running conditions and I settled in to my race plan straight away although amazed Mike Rattan had shot off ahead as he was running the 24 hour race and me the 12. I caught up with him on the 3rd or 4th lap and he explained he had hurt his back on the bucking bronco the previous evening so was rattling the miles in before the inevitable pain stopped his race. Michael had been having toilet breaks and James was cruising along like a well maintained running machine on a mission and after a few hours we were all churning out laps with ease. Around about 6pm I had a lethargic feeling creeping in and the reality of catching the 12 hour course record was not going to happen I readjusted my plan to just keep in the lead and try and grind out a win. Probably a 50 mile race 3 weeks previously would explain the lethargic feeling. Michael had decided to pull out about 8pm and went for a lip while James powered on and passed me while I just wanted to finish. I still do not know if Sarah was telling me porkies about 10pm when she said a runner was catching me and was on the same lap only 2 miles behind, but it was enough to make me up the pace and do another 3 laps before the short loops began. The horn went at midnight and I planted my peg with between 75-76 miles completed (results awaited). Lots of hugging and hand shaking and then a sit down. Andy confirmed I had won the race and I headed to my tent for a change of clothes for the homeward journey, sadly we had to go straight back down to Glasgow due to commitments on Sunday morning. James meanwhile continued on relentlessly and motored to victory in the 24 hour race logging a new course record of 144 miles hotly pursued by Neil McNicol with 143 miles, remarkable endurance from both guys.

Sarah and Andy went above and beyond for us and I think it only fitting we both at least won for them to say thanks.

To the Glenmore 24 and BAM team my utmost thanks for yet another outstanding superbly organised event. To all the other runners and support crew I offer the same, sometimes when running endurance events like this the mind wanders and you (probably just me) don't always acknowledge words of encouragement but please be assured they do sink in and are all appreciated just not always at the point of contact.

Glenmore results
Posted by GERRY at 21:29