There was a limit of 100 entries for this race and luckily I secured one as soon as the entries opened as it was full within hours. Never having set foot in the Pentland Hills before it was to be an new adventure. Minus 4C when I set off from home along the M8 but a beautiful crisp clear day. Managed to find Threipmuir Farm for registration where the first indication of what lay ahead was in the signing of a disclaimer absolving the race organisers of any liability to injuries caused while running the route. The word was there was some ice on the course, how much was still to be discovered. 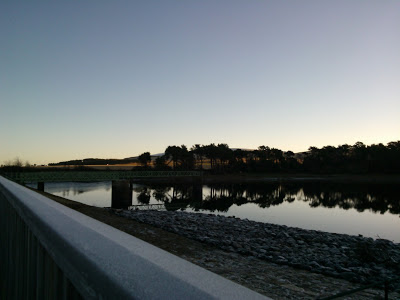 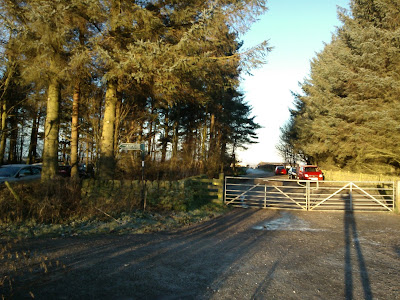 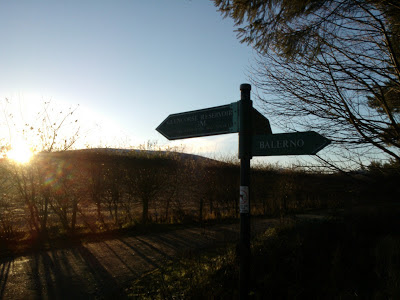 Footwear was going to be key to survival today so a tricky decision had to be made. The last 3 Decembers have thrown some treacherous icy conditions at us and I have stuck with my road shoes and thankfully they have kept me upright but as this was more trail and fell running I went with my new bright orange Adidas trail shoes. The race start was moved onto the grass verge along the first reservoir as the path was like a skating rink. You soon realise this is a serious race when the runners vests all have a mention of 'HILL' in the club name. So off we went sliding away for a few miles and after my second fall I admitted to myself I was a twat and 'yes' I had made the wrong shoe choice. There were 6 runners ahead and I could not hear anyone close behind so the target was the man ahead and hope he is going the correct way. The paths were just all ice so bounding across the grass and heather and anything resembling green stuff was the only option. Once I reached the tarmac path at the next reservoir I was back on terra firma but still had to be cautious. I had lost a bit of ground while performing like a newly born calf trying to stand for the first time. Bambi did come to mind but I think he got the hang of it quicker than me.

A kind steward pointed me up a hill as he mentioned that we were at halfway and although I could not see the top of the hill at least it was grass and not ice. As I got higher a layer of icy snow was reached and a few miles on this was bliss, it was really great running and I started pulling in the runner in front.

﻿
The view over Edinburgh and most of central Scotland was spectacular just before the descent and I wished I had brought my camera but in hindsight probably just as well I hadn't as it would have been in bits by now.﻿ I passed the runner in front of me around about the last reservoir and with 3 miles to go tried pushing on a bit but a long icy uphill path put paid to that although there was a short stretch of forest to the left of the path which I jooked through. Downhill now and onto the final straight to the finish, across a small bridge and through a gap in a wall and 'wallop' , I was now staring at a clear blue sky. I don't believe it, 100mtrs to go and I land flat on my back with a bit of a somersault into the bargain.


The steward on hand kindly asked if I was ok and as I hobbled up the grass verge I proclaimed I would be once I finished. So hobbled to the line finishing in 1hr 38mins 5secs in 6th place and was handed the 1st vets prize so a good day out in the hills. The medic on hand cleared the muck out of my leg and I refueled with a mug of tea and a couple of slices of fruit cake (how appropriate).

This was a belter of an event and superbly organised by Harmeny Pentland Runners, many congratulations guys this race will be very popular next year.