So six months of all out training and the taper has begun towards next weekends 2017 'A' Race, the West Highland Way Race. It has been a quick 6 months and I cannot say I have enjoyed it all, in fact it just shows how precious life is and how we should all get out there and live for the moment as life is such a cruel thing at time.

In my last blog I reported how a great friend and long time running mentor had died suddenly and how I was wearing my old club vest in his memory for the rest of the year. Well it turned out I was going to get hit with another shock when on the 27th March my dad died suddenly. To say this was a shock would be an understatement as there had been no indication of any problems and he was actually active till the end, so much so that it was on a group ride with friends out on his road bike he had a heart attack which took him instantly. He was half way up the Crow Road climbing the Campsie Fells at the time and the only positive thought I could put on it at the time was at least he was doing something he enjoyed and he suffered no pain. 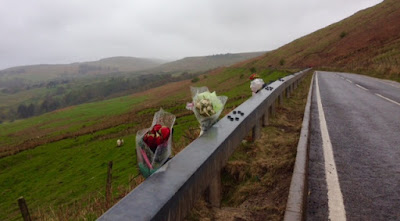 It is times like that when friends rally round and the support we all received was tremendous and I would like to say a big thanks everyone who contacted me with kind wishes and thoughts. On the Sunday after my dads death we had arranged a group run and Alex Potter mentioned a song that had touched him in similar circumstances and when I got home he had sent it to me on itunes so I thought I would share it with you all as if I am crying you all may as well join in.

Training continued on and my appetite for running slowly filtered back and with the support of Michael, Rob, Alex , Mark and James I now think I am as fit as I should be for the race so hopefully I can do myself justice with a great WHW race and I suppose I don't need to say it but 'this one is for you dad'.
Posted by GERRY at 12:40