What with having a weak will and and a tired body after two ultras in August I changed to the 12 hour race option a few weeks beforehand and started planning a new strategy which was basically get it done and then have a few beers to assist with the sleeping in the tent overnight. Mrs Wife and the little dude decided on Thursday evening that as the weather forecast was favourable they would come afterall and be my back up crew which would save me from being unsupported and give them their first taste of camping out. So car loaded to the gunnels and ultra runner food aplenty loaded we headed up early Saturday morning for the midday start giving us time to set up the tent at basecamp at the Glenmore Forest Park next to Loch Morlich. 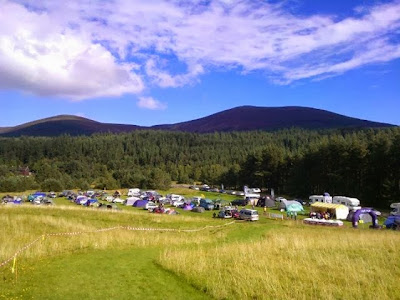 Mysteriously our pop up tent did not want to do what it said on the tin but after quite a few tantrums and shouting it was in general tent shape and secure enough to not blow away during the day. Race crew have been scrutinizing campervan brochures ever since and I am inclined to agree it is the way forward.


I had been confident I could grind a decent result out for the 12 hour race and started off feeling fine and enjoyed the first 4 laps but at the start of the 5th lap just after the wee climb out of camp you go down a rocky path section for about 30 feet and half way along it I slipped on a rock and twisted the whole right hand side of my body and knew I had damaged something. Initially this did not stop me but as the miles and laps went on my right leg and and shoulder just did not want to work and I felt as if I was dragging myself along reluctantly. This feeling did not detract from the event which was unfolding though as on every lap the banter with fellow competitors was great and my support crew were doing a sterling job even putting off disappearing to Aviemore for dinner for several hours. 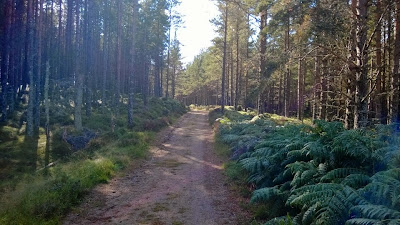 After about 6 hours I had lost count of my laps and the crew had headed off for dinner so I sat down and munched a pork pie and washed it down with a can of red bull, I know it is not the best diet in the world but it certainly worked and found a little more energy. As darkness neared the Mrs returned to tell me of the delightful Italian buffet that her and the wee man had demolished and asked if I wanted any more soup heated up, me replying that as no pizza had been brought back obviously it would have to do.

The race in general is a gathering of all the mad runners you meet over the year at various events all out to see how far they can run on this occasion and it was great to catch up/be overtaken/ get lapped and witness a world record attempt all in the one race.

I was really struggling to move late on and about 10pm had decided enough was enough but after a pause for a coffee and a chat with Doc Andrew Murray and Terry Addison was told to man the f**k up and get out there and finish the job off. There is nothing like running through a forest on a dark twilight night, it was wonderful being out there without a care in the world just me and another 80 odd mad ultra runners although you would not have known it as I seemed all alone most of the time.

About 11.20 I completed my last full lap and continued on to the small laps of the camp to squeeze a little more distance out but really I would have been as well hopping along on my left leg as I was burst on the right side. At 12 midnight the hooter went and the 12 hour race runners stopped and planted their pegs in the ground for their distance to be measured and off I hobbled to my tent. Linda was still awake but the wee man was snoozing away. Those beers I had carefully left out remained untouched as I squeezed into my sleeping bag and tried to catch a bit of sleep but it proved impossible with the discomfort so I just lay and listened as 24 hour runners trundled by through the night.

My distance came in at 67.32 miles in 6th place , I have queried this as I was convinced I had done 1 more lap, but I am not big enough or brave enough to argue with Ada and her cattle prod so 67.32 it is.

I will hopefully be back on the start line next year if I can secure a place and remain fit, support crew hopefully as well although maybe with more improved sleeping arrangements.