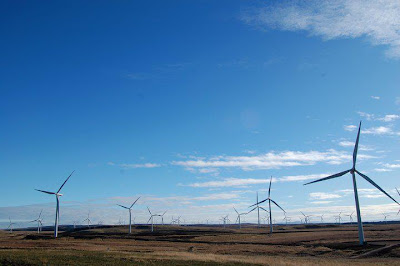 The photo above should give an indication to what conditions to expect during this race, although I must admit I had given this issue very little thought pre race. Those big things in the photo only turn if its windy and unfortunately on race morning they were turning at a rapid rate of naughts with a little rain thrown in for good measure. Mustn't grumble though as it was warm and it did clear up and only 45 miles were blowy as the last 5 miles were back in the outward route.

A small field of 21 runners started this year but I am certain that under the leadership of David Meldrum and a cast of many stewards this race will grow in stature in the SUMS series.

So the race begins and Grant sprints off into the distance and I settle in to my stride, second position for 50 miles in the hope I might pull him back in at some point but knowing realistically it will not happen. Tired legs from the Devils two weeks ago and not knowing this route I was a bit hesitant to set off too fast. It was a bit blowy for the first 5-6 miles but it calmed down and as the direction was constantly changing not too much of an issue. I have to admit I did not have a clue where I was out on the country roads but it was all lovely scenery and I noticed that all the way there was next to no litter and the roads were pot hole free which was perfect for the cyclists taking part in the event which was starting 2 hours after our start and following the same route. Checkpoints every 5 miles with water and a drop bag if required meant it was not necessary to carry any supplies which is ideal when racing is the order of the day. Around about the 25 mile mark the cyclists started passing and there words of encouragement all helped, although the "you are looking good" cry was a bit worrying as they had a view of my backside. I reached the 40 mile checkpoint and was greeted by Helen and John Munro and Helen offered to get me a pint from the pub they were stationed outside, very tempting but if I had had one I would have ended my race there and then and stayed in the boozer.

Last ten miles took us past the Whitelees Wind Farm and headed back into Strathaven with a couple of climbs I had not noticed on the way out but with a gentle breeze now pushing us home. I finished 2nd place in 7hr 11 mins 30 secs , some 30 minutes behind Grant. I had not seen him or any other runner for most of the 50 miles, just as well I get on with myself then. My legs were well tired but I had no cramp issues and all the small niggles kept at bay.

A superb race and the interaction with the cyclists and the wonderful marshalls make this an unmissable race and I would highly recommend it for next year.