Sometimes in a roughly sketched training schedule a race sneaks its way in right slap bang where you needed it least but there is no option but to enter it because you know you will enjoy it. Having run the two previous LK marathons I wanted to carry on the sequence and stay ever-present but with Glasgow to Edinburgh following 12 days later a little restraint may be required.

Now with serial blogger Sarah Self posting an amazing time at the Alloa half the weekend before I felt I really had to give it a bit more effort or I would be letting the Daftie team down.

Up at 6am and the usual pre marathon breakfast of porage, coffee and toast with peanut butter I set off at 7 getting to Loch Katrine just after 8 in plenty of time to register and go on a short warm up run. Marathon start was 9am which was to be followed by the half and 10km. As I registered both Al Running Gannett and Julie Clark had a chuckle about my number being 21 and could I remember all those years back to being that age. Just before the start Audrey McIntosh asked if I was going to be first back today after a 2nd and a 3rd place previously but I remarked it was unlikely as there is always a whippet lurking in a starting field.

Just as the countdown to race start was about happen we had a flyover of a squadron of geese at which point I covered my head remembering the green muck I had washed off my wife's car the day before after a fly by at our house a few days ago.

We started bang on time and I was at the front from then till about 6 miles accompanied by a lad who told me he was really more of a fell runner which was rather apparent from his ease of climbing and descending the many undulations we were encountering. Now as I have explained to training mate James Stewart a simple look at my Strava run details and the GAP statistics tells you I speed up going uphill but slow down going back downhill and this was when a small gap developed and by half way I reckon I was about 1 minute adrift of the leader. I have now almost got my marathon nutrition correct in so much as I take one gel and 3 s-caps for the entire distance, allowing the heat to dictate the need or not to eat them. Today I held off till half way and took one cap with a mouthful of water and then 18 miles for the other 2 caps and the mixifuel viper gel, washed down a small cup of water from John and Helen Munro at their water station, safely depositing my waste in the wheelie bin to avoid any threatened time penalty for littering.

On the way back I received an almighty shout out of support from Angela (pictured below) another Ultra Daftie who was making her LK marathon debut and she went on to complete the race in a very respectable time. 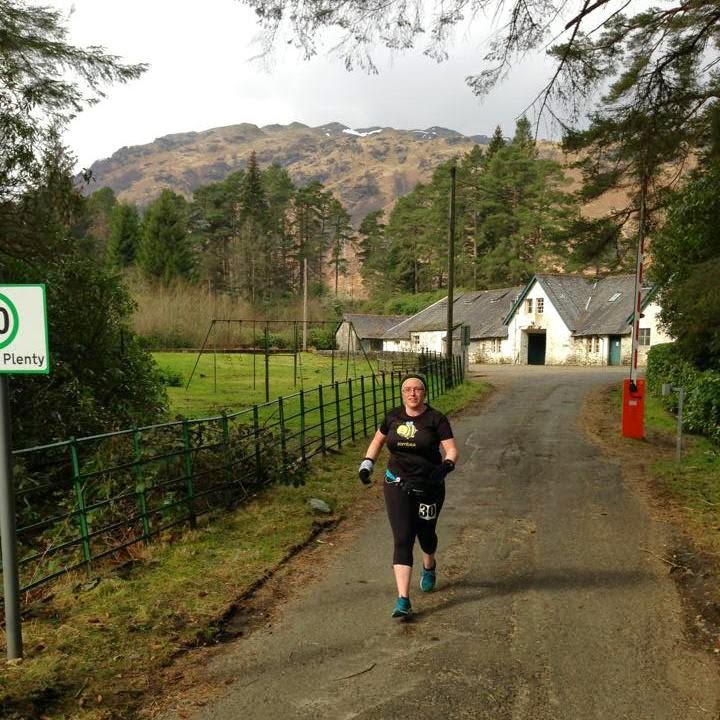 The gel kicked in just in time for graveyard hill, a climb of about 1 mile which brought the lead cyclist out of his saddle and resulted in him pushing his bike up part of the slope. I had started to pull the leader back in and reckoned I would catch him by 22 miles. Mile 21 was 6:38 and as I caught the leader he remarked the hills were taking their toll I passed him and just tried to keep even splits till the finish. Mile 22, 6:19 mile 23, 6:39 mile 24, 6:38 and mile 25 6:46 and to finish 6:40. The mind does play tricks and you think someone is going to fly past you at some point and I even asked the lead bike if anyone was catching and he replied no one in sight. I had been passing half marathon runners for the last 6 miles and the support and encouragement from them was great which I duly reciprocated back to them although possibly and bit muted and short of breath. 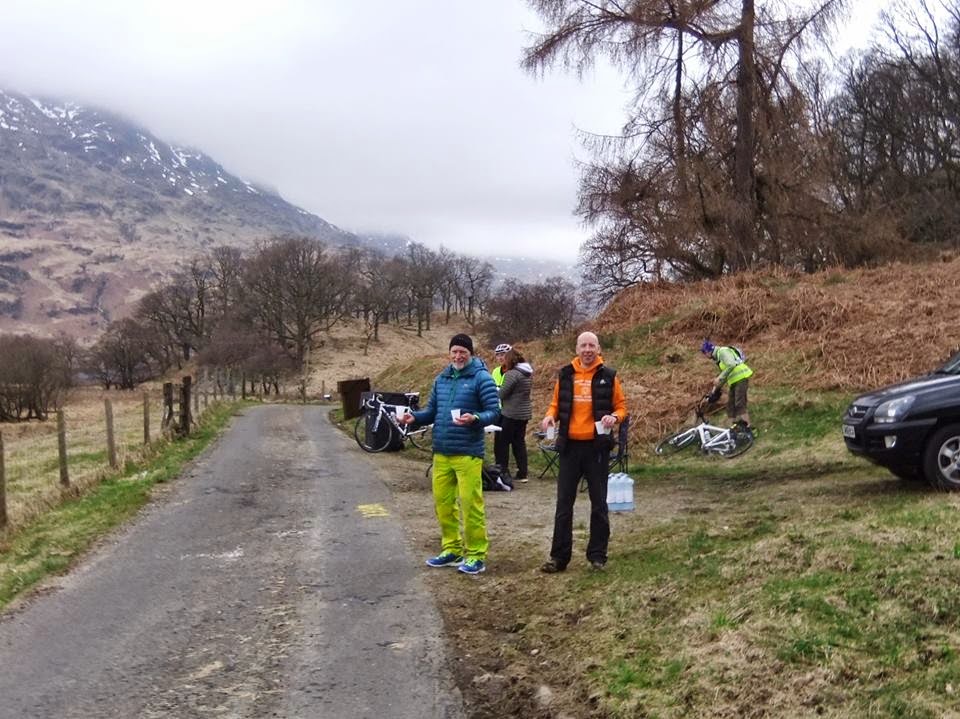 I crossed the line in 1st place in a time of 2:53:26 a full 7 minutes faster than last year. I think the extra morning runs and the February Run Till You Drop challenge have been beneficial although somewhat knackering. 2nd and 3rd place were not far behind and Les Cairney near collapsed over the line getting his sub 3. I texted Linda to tell her the result and she replied that my son Andrew had replied 'FINALLY'. 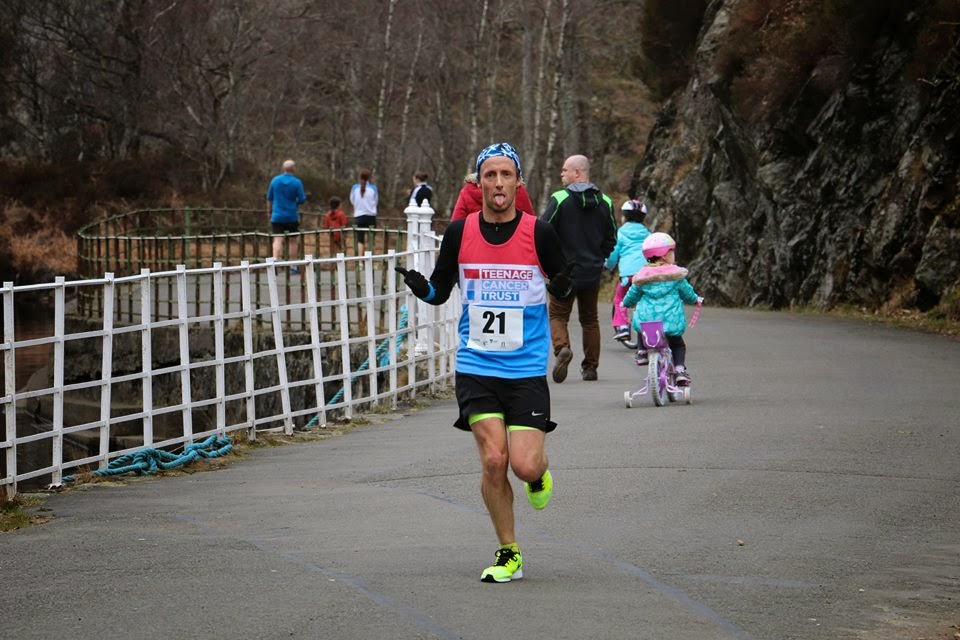 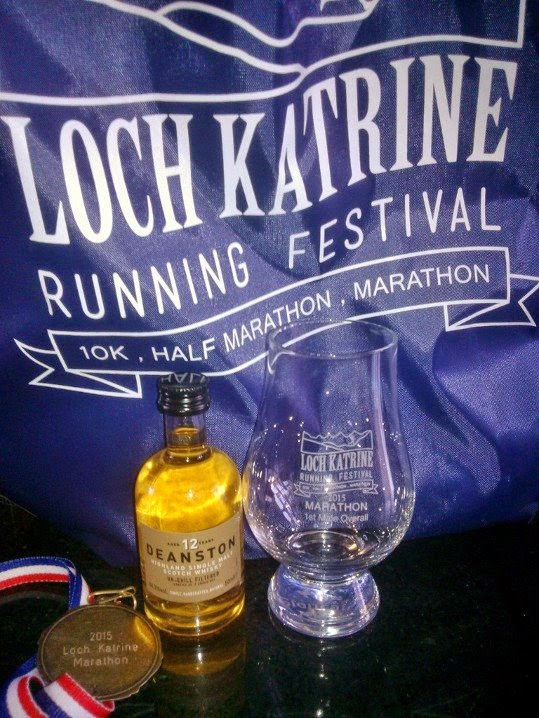 Nutrition wise I think I have it sorted now and by not forcing too much liquid in I can run a little more comfortably although I think today's approximate 300ml may be a little on the pushing it a bit side.

The Loch Katrine Festival of Running is a wonderful event with friendship and encouragement throughout and Audrey and all of the large family of helpers can't be congratulated enough for the superb organisation of these races.

Garmin details here - distance showing short of 26.2 but other watches do and the course is accurate.