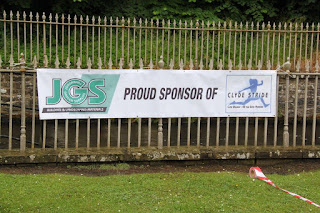 Being only a few weeks after the West Highland Way Race and me making a balls up of getting the day off work, I passed the handling of the JGS relay team for the Clyde Stride to my brother Chris with me hurrying from work to run the last leg. We weren't expecting to podium this year but would not be far away as long as nobody got lost. Des McKeown took the first leg as he hadn't reccied leg two and didn't want to incur the wrath of the team by getting lost in some Cambuslang field or Blantyre housing estate passing on to Chris who was familiar with the route. Chris had had his usual 10 days pre run training in Ibiza so was not at his 'race weight' should we say but sometimes a slow leg is better than a tour of everywhere but the correct route. Chris passed on to Colin McNair at Strathclyde Park and I am not sure what position we were in at this point but Colin ran a belter of a leg to hand over to me in 5th place at Mauldslie Bridge after my mad dash from work. We were now in 5th place with an East Kilbride and Maryhill Harriers team closest to catch in 4th and 3rd.

I knew I had my work cut out as both teams ahead had a good lead but I caught the 4th place EK within about 2 miles so now one to go for a podium. I wasn't holding out much hope but as I neared Kirkfieldbank a blue top appeared around a bend and I put the boot down and didn't give him any chance of latching on to me as I passed him. The finish for the Stride is in a stunning location and the descent down in to the village is a great view, just a pity you know you have the joy of another mile after you spy the finish line. I think I surprised the lads as I came through the gate and descended the stairs to the finish line to receive my hug from Lee. 3rd place secured and I was burst.


Next up was the Devil o The Highlands 42 mile race, the final race in the *unofficial* Triple Crown. Only 6 weeks previously I had vowed to never ever f*c**ng come back here I was set to run on part of the course again, albeit the MOTORWAY SECTION. I had only entered as a friend was meant to come over from the USA and my plan was to run with him but a couple of weeks before the race he messaged to say he was having to withdraw. As I had secured a ballot place and was somewhat fit (although not totally recovered from the WHW) I worked on the principal that I needed to run as it was downright rude not too as many others had been unlucky not to get a slot. So Linda and the wee dude decided to come with me and make good use of the hotel booking whilst I went for a run. I promised Andrew we would stop and talk to the deer at Kingshouse Hotel as he didn't believe me they just wandered about the car park.


Due to an accident in Fort William we were delayed arriving on the Friday night and didn't get dinner till well after 9pm which I was a bit worried about with the early rise and 6am start, but it just meant I just needed less breakfast. Getting out of bed at 3am and forcing food in to your body is not an easy task but I consumed as much as I could and sauntered round for the bus to Tyndrum from the Fort William bus station. Registration done and a toilet visit complete I caught up with training partner Mark Ashby and had a blether about the race and tactics, the outcome of which was he was seriously hurting after the Clyde Stride and I should have stayed at home and put my feet up and recovered further. So the tactics were try and finish and at all costs don't get injured attempting to finish.

I caught up with Robert Turner and Davie Gow on the start line and that was as close as I got to them all day, although Robert unfortunately pulled out at Kinlochleven I think. West Highland Way and Fling winner Rob Sinclair was also there and he just disappeared like he was running a 10k. The race was quite uneventful and mostly run on my own after pulling ahead of Norrie McNeill on the climb up on to Rannoch Moor. For some reason both my calfs started pinging away with cramp warnings on the climb over the Devils Staircase and refused to go away for the remainder of the race, totally bizarre as I was well hydrated although maybe just a sign that the legs are still in recovery mode.


The new race finish is certainly a bit tougher than the mile along the road but a great setting to finish on the park with the tented village set up. I crossed the line in 6:43:19 a bit slower than expected but a finish and no damage done. Mark came in 7:37:57  and just happy to finish. Surprisingly though at the prizegiving I had won 3rd in the Scottish Athletics Ultra Trail Championships and Mark was 1st Vet50 in the race. 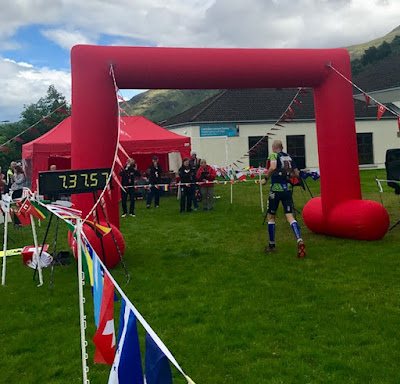 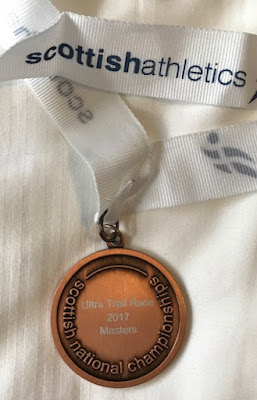 Not much I could add all the great comments online, the organisation for this event is superb. John, Noanie and team put on a wonderful event, many thanks to everyone from start to finish who help out at this race.

It is only a 10km race and it is the Vets, how difficult could it be!!! Well it hurt, it hurt a lot but it was at least a return to short and sharp. Michael was staying with me for a few days and persuaded myself and Kate that we would enjoy a wee run in Pollock Park. 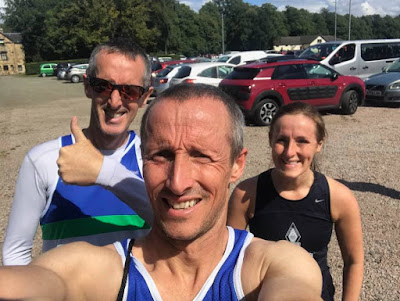 Not much I can say but it was 3 loops with a couple of climbs each time and it hurt. 38mins 20secs of pain but it was a return to road racing and my first 10k in 3 years so it is a start. Michael was about a minute behind but he had won 1st old guy at the Haddington Half the day before so can be excused an easy run. Kate cruised around and cursed us both at the end for persuading her to run but we both think she really really enjoyed it.

Loch Ness Marathon training now, back to solid ground for a while.