As a recovery week after the Fling I had two short races lined up as part of the Scottish Veteran Harriers Club race series. The first was a 4.8 miler at Drumpellier Park in Coatbridge named the Snowball race as every finisher gets a pack of 6 Lee's snowballs, great with a cup of tea after the race. My legs were still a bit tender from Saturdays exertions but I still managed round in 29min 14secs which was only 30 seconds slower than last year so no complaints.

A good turn out from fellow VP-Glasgow runners Kenny, Tom and Jaqui . 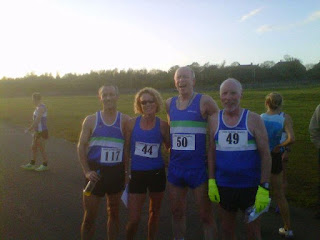 On to todays race at Cartha Rugby Club/Pollock Park for the 10k and my legs were feeling almost normal again so I set off moderately as this is what is classed in a road race as undulating. When friends know you have ran an ultra a week previously they express their dignified disgust as you pass them as the expletives mad Al McLachlan of Bella used are unprintable. Still had a bit left on the second lap and pushed home in 37min 5secs, not far off my fastest on that course so recovery going to plan.

So next one up is the Monklands Half next Sunday, I get a long lie as it is only a mile and a half from home so ideal for travel, lets hope the sun comes out and a bit of warmth in the air.
Posted by GERRY at 20:49