Another one of those weekends with races on consecutive days, my own clubs road relays on Saturday and the Neil McCover Memorial Half Marathon on the Sunday. How much damage could a wee 3.22 mile leg of a hilly road relay inflict on me, well more than I thought to be honest. I was on the 3rd leg for the vets A team and we finished in 2nd place with a time of 1hr 18 min 7 secs, my leg being 19min 30 secs. It really is a hard shift especially when you have done next to no track or speed work all year. I had an added incentive this year when my younger brother set off on the 3rd leg 2 minutes ahead of me running for Kirkie Olympians, it was a push to catch him but with a mile to go a wee word in his ear and wave were followed by a string of well wishing and encouragement, well not exactly but I couldn't repeat it. On the plus side our VP-Glasgow 'A' won the race outright for the first time since 1966, a superb achievement for our younger guys and a little taste of future success for a fast group of guys.

On to Sunday morning and a chilly but perfectly clear and calm morning, perfect day for a race. 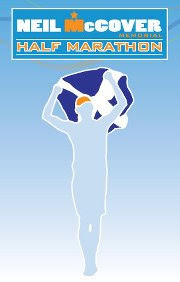 Short trip to Kirkintilloch and registration at the leisure centre. This race was also the British Masters and SVHC championships and also the last race in the Run Kirkintilloch race series for the year so lots of races within a race taking place. 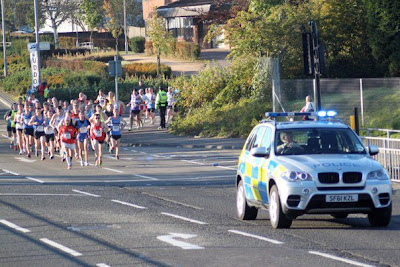 The route for the race is the old Luddon half marathon route from the 80's so I am told by older runners for those with good memories, but the jist of it is - head for Milton of Campsie, hang a left to Lennoxtown, left again to Torrance, up the hill to Bishopbriggs, pass Marley then hang a left at Burger King, pass the prison down Boghead Road to where you started. If you understood that last sentence you also know it is not the flatest route on the planet so with this in mind a sensible pace would be adopted, my mistake being I did not start with the sensible pace till mile 5. Feeling the effects of the previous days race and a fast few miles I was wondering if I was pushing too hard so decided that with the Liverpool Marathon next Sunday it would be best just to ease off and run an enjoyable race rather than totally wreck myself. There is a climb of about half a mile at 9 miles and having the benefit of training on this route I knew that once this was out of the way it was mostly flat to the end. Cheered on by a group of the Springburdz at Burger King I shared the pace with a V60 from Ronhill and although felt a little guilty pushed on and left him with about a mile to go. Finished in 26th place in 80 min 45 secs , 5 seconds faster than Dumfries  last week and a seasons best. Very pleasant run in the end on a glorious autumn morning. 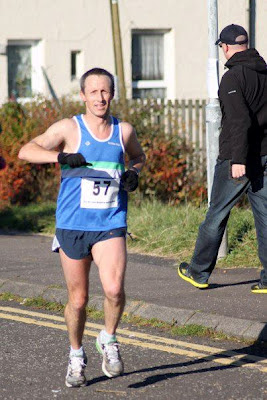 Massive thumbs up to Robert, Ada and all connected with this event from the marshalls to the local constabulary a superb Half and 3k fun run.

Photos courtesy of Karen Craig , aka Ma sister in law.