Two months into the training now for the West Highland Way Race and I have had eight weeks of 50-60 miles per week, so it was time for a wee burst of speed to open the lungs up. I cut the Saturday run to 12 easy miles and the plan was to run from home down to Strathclyde Park do my lap and then run home but as it was howling wind and rain I just drove down and had a couple of warm up laps in preparation for the sprint. 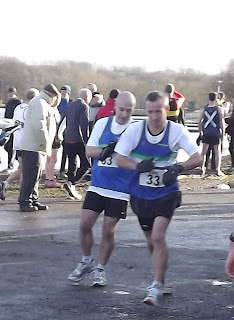 I was on leg 2 and with about 70 teams entered it was a bit busy waiting on the handover for my lap from Ralph. I was off and running with one clear target ahead which unfortunately for my younger brother Chris was him, he had headed off just over a minute ahead of me and he knew what was coming but how long he could stretch it out being the question. 2 miles was the point and I refrained from skelping his arse as he is a wee bit touchy but I am sure all the comments were of support!!!

I ran my 3.64 mile leg in 22min 16 secs although official time is 22 min 11 secs. I ran at almost the same average mile pace all the way and felt great all the way not even noticing the inclines on the third mile so the training must be reaping rewards. Team position was 11th overall one place behind our V50 team who were second in the over 50 competition. Overall the event was won by Ronhill cambuslang with some rather fast individual times.

Another excellent Scottish Veteran Harriers Club event. Thanks to the timekeepers and marshalls for all the support.

So another week ticked off on the grand plan and now time to up the distance on the weekend back to back runs. This coming weekend is 15 miles steady flattish on Saturday afternoon to be followed up early Sunday morning with 30 miles on the West Highland Way from Milngavie to Conic Hill and back, with a trial of the pork pie nutrition strategy.