After withdrawing from last years London Marathon to save my legs for the Fling I have regretted it since as it stopped my ever present from 2003. So this year the decision was to run both in the same week principally  to get miles in the legs and get some nutrition consumption practice in. With the sad events in Boston a few days beforehand a sense of togetherness had flourished and arriving in London on Friday afternoon and hitting the expo there seemed a really special feel about the place. 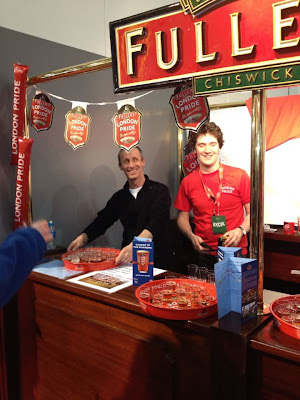 Friday night myself and Michael went to our favourite restaurant for steak and chips which I washed down with a few beers as part of my carbo loading. Saturday morning was cool but sunny and we had a lovely pre breakfast run around Hyde Park with a wee stop off for photos. 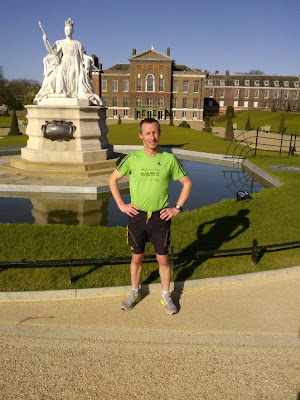 Full bhuna fry up was then consumed before a short stroll round Regent Street and then search for a barber for my marathon haircut. Evening meal was early with the Team McKeown McMillan squad who were down in force fundraising for their charity.

Early rise on Sunday morning, breakfast consumed and then off to let the fun commence. The trip on the underground to London Bridge and then the train to Blackheath is always fun with a mix of nervous first timers and experienced runners all heading for different start zones. We are fortunate enough to qualify for the Fast Good for Age which is a separate section on the red start and small enough to meet up with the usual suspects. 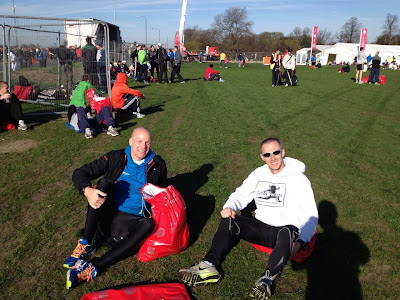 A nervous wait for the start and we managed to lose Duncan in the muster area and have not seen him since and then a 30 second silence for the victims of the Boston attacks and we were off. The planned pace was for a  2.50 finish for Michael which I was going to pace him towards and ease off about 20 miles but after 3 miles he had disappeared behind me but I thought he wouldn't be far away. The crowds were overwhelming in places and certainly the numbers must have been greater than ever. Not many spots on the course now where there is no support. I passed through 22 miles at 2.24 and sussed 2.50 was not on so eased off a bit and just enjoyed the run in to the finish, or as much as I could as I felt a small twinge in my right calf which felt a bit like it was going to cramp. Crossed the line in 2.52 and my official time is 2.51.53 which is only 50 seconds short of a pb so happy with that although I did go faster than the plan. Michael, Mark and Al all came in between 2.56 and 2.58. Michael did tell me off for going off too fast but I pointed out to him I had paced it perfectly for him to 22 miles where he was meant to push on for the sub 2.50 but unfortunately he had not kept up.

A few beers at our usual haunt Henry's next to Green Park underground and then airport and home.

A few days rest now and see if my legs recover for 53 miles of the Hoka Highland Fling on Saturday. Hoping for a sub 10 hour finish but really not bothered as I just want to get to Tyndrum feeling I could continue on and not feel totally gubbed.
Posted by GERRY at 09:43