Well this is a strange one to put in words but it turns out on paper I am the 2013 Scottish Athletics 50km Road Race champion. As I was waiting at the prize giving I expected to be called second for the open race but knew I had won the Vets race being the fastest old geezer but Adrian announced  I had done the double much to my surprise as I had been well beaten by Doc Andrew Murray by some 9 minutes. I asked Andrew about this shortly after feeling rather guilty about taking a prize which technically should have been his but he held his hands up and said it seems he hadn't renewed his SAL membership so was not eligible. I would be gutted so I think I know how he feels after reading his blog. 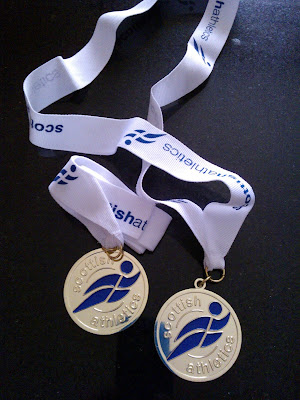 So to the race itself and my preparation has gone well with the WHW training and the Loch Katrine Marathon only 3 weeks ago. I was self supported just leaving my liquids at the side of the path although Helen Munro kindly offered help when she saw me fighting with a poly bag around about lap 15. 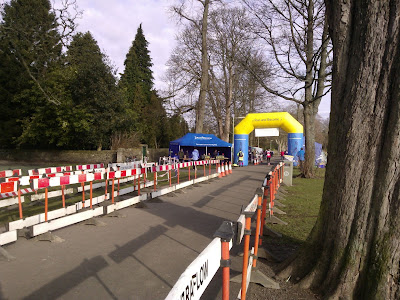 It was a beautiful clear morning and about -3 when I arrived in Perth and I was rather happy I was not starting earlier for the 100km when it was undoubtedly even colder. I had a warm up lap running anti clockwise encouraging a few friends along the way who were in for the long haul.

The 50k started at 10am and the sun was shining with very little wind of note so ideal running conditions although I would have preferred a few more degrees of warmth. I settled into a steady rythmn after 3 brisk laps and soon my mind turned to when I would take a drink or gel and it turns out you do not need much in 31 miles as all I consumed was 2 s-caps, 2 x 300ml water/sis mix and 1 viper gel. Strange how you think afterwards that if you had taken more would I have been faster but I really think that after finishing feeling like I had pushed the race but some energy still left I probably got it right.

With a lap race you normally know how you are standing in the race and the leader board at the start is a great reference but I know all too well it can all change in the final few laps as 2 years ago with 2 laps to go I was in 5th and finished 3rd. This year was just as interesting with 2 laps to go the only person I was certainly not catching was GB athlete Paul Fernandez as he had lapped me twice. I was expecting others along the way but none had caught me yet and with not long to go I hoped they wouldn't. As I went up the slope for the 2nd last time I caught my pal Craig Reid and offered a few words of encouragement, to which I received a mumbled response. I was now in 3rd place but no one in sight so pushed on just in case Craig wasn't done yet. I was then passed by a rather fresh looking English runner whose words were 'lets move it only 2 miles to go' and try as I could I could not hold on to him and he took a minute off me.

I finished in 4th place overall in 3hr 30min 48 secs - Chip time, averaging 6min 48secs per mile and winning the titles as noted in the first paragraph.

It was interesting watching the 100km runners and a really great atmosphere with all of the time keepers, support teams and many other helpers throughout the course. Many thanks to Adrian @ Run + Become and his team for hosting an excellent event and anyone else I forgot to acknowledge on Sunday.
Posted by GERRY at 16:15